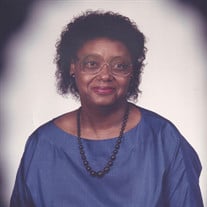 If I can help somebody, as I pass along, If I can cheer somebody, with a word or song, If I can show somebody, how they're travelling wrong, Then my living shall not be in vain. If I can do my duty, as a good man ought, If I can bring back beauty, to a world up wrought, If I can spread love's message, as the Master taught, Then my living shall not be in vain. My living shall not be in vain, Then my living shall not be in vain If I can help somebody, as I pass along, Then my living shall not be in vain. ~ Mahalia Jackson Dorothy Lee Watson Levy, 79, departed her earthly home at Palmetto Health Baptist Hospital, Columbia, South Carolina on Wednesday, February 10, 2016. She was born in Pinewood, South Carolina to the late Leon Watson, Sr. and Mozell Kelly Watson. She was married to Roosevelt Levy on May 23,1957 and from this union, six children were born. At an early age, Dorothy accepted Jesus Christ as her Lord and Savior. Prior to her death, she was a member of Emmanuel United Methodist Church, Sumter, SC where she was active in several organizations: Sunday School, Vacation Bible School, Stewardess Board, and the Soup Kitchen. She was also well known for her outstanding collard greens and potato salad at the church picnics. Mrs. Levy was a graduate of Lincoln High School in 1954. She later received training as a Certified Nursing Assistant (CNA) and worked for NHC National HealthCare. She also provided private sitting services for nursing home residents. She was known for her community service activities and served as an advocate for her community apartment residents. Family was very important to Dorothy and she somehow managed to make all of her children feel uniquely special and loved. She was very proud of her grandchildren; attending birthday parties and graduations were memorable events she cherished. She enjoyed music, particularly church hymns; singing them was her favorite past-time. She also loved to dance. In addition to her parents, Mrs. Levy was preceded in death by her sister Ada Moses Isom; brothers, Charles Watson, Sr., Leon Watson, Jr., Alvin Watson, Sr., Robert Watson, and Julius Watson, as well as a son, Timothy Paul Levy. To cherish the memory of this beautiful matriarch, Dorothy leaves: two sons: Solomon (Darlene) Levy, Macon, GA and Simon Peter (Vicky) Levy, Sumter, SC; three daughters: LaVerne (James) Jackson, Irmo, SC, Janet (Conroy) Jackson, Columbia, SC and Jacqueline (Kevin) Curry, Columbia, SC; former daughter-in-law, Jenefier Levy-Gadson, Sumter, SC; one sister, Susie Mae Witherspoon of Sumter, SC; twelve grandchildren (in order of oldest to youngest): Melody Levy, Brian Bowen, Courtney Jackson, Justin Bowen, Cory Bowen, Tiffany Levy, Jasmine Jackson, Kevin A. Curry, Laken Levy, Kayla Levy, Kirsten Curry and Simon Levy II; three great-grandchildren; nieces, nephews and a host of other relatives and friends.

If I can help somebody, as I pass along, If I can cheer somebody, with a word or song,&#8232;If I can show somebody, how they're travelling wrong, Then my living shall not be in vain. If I can do my duty, as a good man ought, If I can bring... View Obituary & Service Information

The family of Dorothy Lee Watson Levy created this Life Tributes page to make it easy to share your memories.

If I can help somebody, as I pass along, If I can cheer somebody,...

Send flowers to the Levy family.