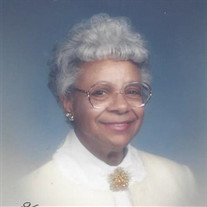 Dorothy Hopkins Robinson was born in Cayce, South Carolina, on June 11, 1932 to the late Thomas Woodard and Minnie Johnson Hopkins. Early in the evening on Saturday July 29, 2017, she was called to her heavenly home. Ms. Dorothy Robinson attended Harbison High School, Benedict College, and served in the United States Air Force during the Korean War. She was a member of Mt. Pisgah A.M.E. Church, where after committing her life to Christ, she lived as an authentic witness as a Child of God. In 2010, she was recognized by Mt. Pisgah A.M.E. Church as a “Pillar of the Church”. In 2012, she was honored as Woman of the Year. She also served as a missionary and was a dedicated Sunday school teacher. During her lectureship, she exhibited a passion for teaching and leadership by engaging people in evangelism, discipleship and the teaching of Christ through her Sunday school lessons. Mother Robinson (as she was affectionately referred to by her closest friends) throughout her life led by example, by professing her love for the Lord. She believed there was only one way to do things, the Godly way! Mother Robinson’s gift was to provide guidance and love for all those she encountered. Although she had encountered life challenges and disappointments, her perseverance and belief in the Lord kept her steadfast. In addition to her parents, she was preceded in death by her siblings: Dr. Rubye Hopkins Jones, Glover Hopkins, Thomas Hopkins Jr., Evelyn Hopkins Williams, Lucy Hopkins Jones, Clarence Hopkins, Joseph Hopkins and Johnny Morris Hopkins. She leaves to cherish precious memories her children: Douglas Myreon (Ingrid) Robinson of Lovettsville, VA, Felicia Kaye Robinson of Columbia, SC, and Martin St. Clair Robinson of Jakarta, Indonesia; two grandchildren: Lauren Nicole Robinson of Denver, CO, and Stephen Andrew Robinson of Seattle, Washington; and a host of nieces, nephews, other extended relatives and friends who will miss her dearly.

Dorothy Hopkins Robinson was born in Cayce, South Carolina, on June 11, 1932 to the late Thomas Woodard and Minnie Johnson Hopkins. Early in the evening on Saturday July 29, 2017, she was called to her heavenly home. Ms. Dorothy Robinson attended... View Obituary & Service Information

The family of Dorothy Hopkins Robinson created this Life Tributes page to make it easy to share your memories.

Dorothy Hopkins Robinson was born in Cayce, South Carolina, on...