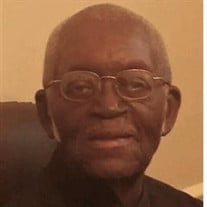 Douglas Baxter entered into eternal rest on Thursday, August, 20, 2020 at his home in Lynchburg, SC. Born on October 15, 1928, he was the fifth of eleven children born to the late Nazareth Baxter and Luetisher Tindal Baxter. A Life-long member raised in Elizabeth Baptist Church, where he served as a Deacon, choir member and wherever his gifts and talents were needed. He attended both the Clarendon and Sumter County Public Schools. In 1948, he laid eyes on Catherine Davis, the love of his life while visiting with friends at her home; and in May of 1953 they married and five children were born to this loving union. Mr. Baxter was first employed by the Montague Company for over ten years, then Campbell Soup Company until his retirement in 1996. After retirement, he was dearly appreciated for his delicious sweet potatoes and collard greens which he credited to God’s grace. Mr. Baxter was a proud Master Mason in the “Do Right Lodge #377 of the Free and Accepted Masons.” Affectionately known as, “Uncle Bubba, Uncle Douglas, Soul and Snake”, in his spare time, he took pleasure in: fishing, hunting, barbequing, singing and spending time with his grandchildren. In addition to his parents, he was preceded in death by one daughter, Cathy Fran Baxter Dunham; two brothers: Johnny Lee Baxter and James Baxter; six sisters: Caron Calhoun, Maybell Newkirk, Lillie Hamilton, Loretta Murray, Gladys St. Thomas and Rosa Jane Fullard. He leaves to cherish his beloved wife of 67 years, Catherine Davis Baxter of Lynchburg, SC; four daughters: Daisy B. Calhoun, Margaret Wilson Wilder, Julia B. Carter and Brenda (Staphon) Williams all of Sumter; three sons, David Lesane, Sumter, SC, Ronnie (Angela) Baxter, Valdosta, GA and Richard Baxter of the home; 18 grandchildren; 20 great-grands, one great-great grandchild; siblings, Luetisha Baxter Dickey, Lynchburg, SC, Cardia Baxter Gamble, Baltimore, MD, and a host of nieces, nephews cousins, other relatives and friends, as well as his dog Gabby.

Douglas Baxter entered into eternal rest on Thursday, August, 20, 2020 at his home in Lynchburg, SC. Born on October 15, 1928, he was the fifth of eleven children born to the late Nazareth Baxter and Luetisher Tindal Baxter. A Life-long... View Obituary & Service Information

The family of Douglas Baxter created this Life Tributes page to make it easy to share your memories.

Send flowers to the Baxter family.