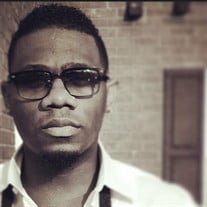 On July 29, 2017, the 34-year-old community leader, community service organizer, and kindred soul of Dwayne Antwan Malcolm was taken from earth while attending what was supposed to be the ultimate, relaxing getaway and Jamaican independence celebration in the form of a family reunion. Dwayne Malcolm was born on September 20, 1982 in Jamaica Queens, NY and later relocated to South Carolina. He leaves to cherish his memories: his parents Barry and Jennifer Malcolm; two daughters Jaylen and Harper Malcolm; a brother Ashenhiem (Carla) Malcolm and sister Tamyka Malcolm; 4 nieces: Aria Malcolm, Taliyah Lamkin, Kyla Malcolm, and Danica Malcolm; grandmother Gloria Malcolm; grandfather Hubert Blake; 5 aunts Juilette (Oswald) Campbell, Elaine (Deon) Maloney, Ann Marie Malcolm, Ceclie Malcolm, Joan (David) Rogers, 3 uncles Carlos (Yvonne) Malcolm, Errol (Beverly) Malcolm, Othniel (Karen) Blake; 3 Goddaughters: Autumn Merritt, Phenix Middleton, and Malaya Caldwell and 1 Godson Jashon Dukes, and a host of cousins and close friends. He was predeceased by: his grandfather Jonathan Malcolm, grandmother Gwendolyn Blake, great- grandmother Carolina Davy, and aunts Pauline Malcolm and Sonji Williams. Dwayne was a 2000 graduate of Spring Valley High School in Columbia, S.C. where he was a member of the marching band/drum line and soccer team. After High School, he matriculated to Francis Marion University and graduated in 2007 with a Bachelor of Arts degree in Mass Communications, where he became a member of Phi Beta Sigma Fraternity, Incorporated. He also attended Full Sail University in Winter Park, Fl., where he graduated in 2005 with an Associates Degree in Visual Arts. He was baptized in 1992 at Wildman’s Street Pentecostal Church in Jamaica, West Indies. Dwayne Malcolm also known as “D.J. Blaze” started his DJ career while attending Francis Marion University as a DJ for campus parties. He quickly caught fire and began to DJ at local nightclubs. His name quickly hit the streets and the “Fireman” became a household name and was in high demand. Blaze didn’t stop at the club scene; he soon took over the airwaves. He began his radio personality career with Power 99 in Florence, S.C. He worked hard to move up and soon took over the prime time spot during the afternoon rush hour for SWAGGA Radio, and IHeart Media Station. During this time, he also started his own radio show “The DJ Blaze Radio Show”, a podcast show that was done with his co-host and close friend Brandon Pearson. He was the co-founder of PYRO Management (an entertainment company he built with his brother Ashenhiem and one of his best friends Narada Howard), a co-founder of Sound Choices Mentoring Program, a co-founder of Sonic Boom Studios and Media Design and was just recently promoted to sales manager for IHeart Media Station. Not only has Dwayne been a featured DJ on the hit show 106 and Park, he has also served as a DJ for many famous music artist and events internationally. In 2002, he was awarded the Outstanding Leadership Award from the Francis Marion University Office of Multi-Cultural Affairs and the South Carolina Music Awards 2015 Club DJ of the Year. He was a great father, son, brother, role model, outstanding leader and friend. He touched the lives of so many with his positive vibes and sense of humor. He made a joke out of the darkest hour and brought energy to the most docile moment. His spirit will live on with us forever.

On July 29, 2017, the 34-year-old community leader, community service organizer, and kindred soul of Dwayne Antwan Malcolm was taken from earth while attending what was supposed to be the ultimate, relaxing getaway and Jamaican independence... View Obituary & Service Information

The family of Dwayne Antwan "DJ Blaze" Malcom created this Life Tributes page to make it easy to share your memories.

Send flowers to the Malcom family.