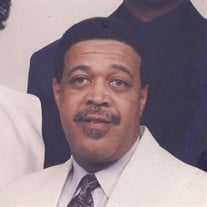 On Monday, May 27, 2019, the Lord reached down and took Eddie Wright, Jr., home to eternal rest in Aiken , South Carolina. Born September 22, 1947, in Columbia , South Carolina, Eddie was the son of the late Eddie Wright Sr. and Carrie Lawhorn Wright. Raised in a Christian home , Eddie accepted Christ at an early age. A devoted member of Bethlehem Baptist Church, which he attended with his family, he served in various ways over the years, most especially as a member of the musical choir during his teenage years. Deacon Seward served as his spiritual mentor, and Eddie was celebrated as a quiet, peaceful, reserved man loved the Lord and adored his family. An attendee of C.A. Johnson High School in Columbia, South Carolina, Eddie later transferred to Bethel High School in Blythewood, South Carolina, where he graduated as a member of the Class of 1966. He attended Benedict College , taking courses in Business Management before transferring to Palmer College and earning an Associates Degree in Business. Employed at Colonial Life Insurance Company, Eddie began his career as a Bindery Clerk Section Manager before working his way up to Assistant Vice-President of Printing. He continued to increase his managerial skillset throughout his employment with Colonial Life by attending management seminars all over the east coast. In 1999, he retired from Colonial Life after forty-four years of service. After his retirement, Eddie continued to stay active by working at Wright and Miller Garage and Palmer Memorial Chapel in Columbia. On January 17, 1969, Eddie married his junior high school sweetheart, the former Shirley Reed. From this union, two children: Therause and Delton, were born. This year, Eddie and Shirley celebrated fifty years of wedded bliss and partnership. Eddie had a love for gospel music and singing; for many years he served as the manager of local gospel group The Good Samaritan Singers. He also enjoyed baseball , both playing and coaching the sport throughout Columbia, Blythewood, and Ridgeway, South Carolina. He loved his baseball team and was both loved and respected by those who played with him. In addition to his parents, Eddie was preceded in death by his beloved aunt Daisy Howell Garrett, whom he called “Aunt Daught;” his uncle Frank Howell, whom he called “Daddy;” and his special cousin Cornelia Lorick. Eddie leaves to cherish precious memories his beloved wife, Shirley Reed Wright, of the home; two sons: Therause Edward (Amisha) Wright of Houston, Texas, and Delton Tremounte (Clarissa) Wright of Louisville, Kentucky; five grandchildren: Shanae Wright, Shanel Wright, both of Macon, Georgia, Maxley Oree Wright of Louisville, Jalen Wright and Taron Wright, both of Houston, Texas; one sister, Sharon (Elder Jerome) Titre of Hebzibah, Georgia; twin brothers: Desmond (Joyce) Wright and Donald (Joan) Wright of Blythewood; special cousins: Mazola Richardson of Alexandria, Virginia, Seletha Foster of Elgin, South Carolina, Dorothy Sims and Ricky Lorick, both of Columbia; a myriad of nieces and nephews who loved their Uncle Eddie; and a host of other relatives and friends.

On Monday, May 27, 2019, the Lord reached down and took Eddie Wright, Jr., home to eternal rest in Aiken , South Carolina. Born September 22, 1947, in Columbia , South Carolina, Eddie was the son of the late Eddie Wright Sr. and Carrie Lawhorn... View Obituary & Service Information

The family of Eddie Wright, Jr. created this Life Tributes page to make it easy to share your memories.

Send flowers to the Wright, family.