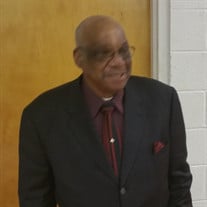 Obituary Edward Holmes Laws Edward Holmes Laws was born on April 12, 1941, to the late William Holmes II and Marie Laws Rush in Sumter South Carolina. Edward attended the Saltertown school in Sumter South Carolina in his youth years. Edward left Sumter South Carolina in 1955 to relocate to Brooklyn, New York to be with his family. Edward started his career as a Truck Driver which allowed him the opportunity to travel and see different parts of the country. He was known as the road warrior who can tell you how to get anywhere before there was google maps. During his travels he meet and married Joan Cade in August of 1960. Out of that union he had 4 beautiful children. Edward T Laws, (Lucky) Phyllis D Laws-Waddell, Stewart M. Laws (Beefy) and Michelle E. Laws. Edward was a loving and devoted son, brother, father, uncle, grandfather, cousin, and a true friend. He was a family -oriented man that loved to spend time with his family. He was a man that was always willing to help when needed. He enjoyed fishing on his leisure time as well as gardening while enjoying his blues music, especially BB King. He was also known as the Master Chef at the many barbecues that he had in his backyard with friends and family. He loved to dress and a passion for cars. Edward had the ability to light up a room as he entered. As we look back over time, we find ourselves wondering, did we remember to thank you enough? For all you have done for us? For all the times you were by our sides to help and support us, to celebrate our successes to understand our problems and accept our defects, or for the teaching us by your example the value for hard work, good judgement, courage, and integrity? We wonder if we ever thanked you for the sacrifices you made to let us have the absolute best, and for the simple things, like laughter, smiles and times we shared? If we have forgotten to show our gratitude enough for all the things you did, we are thanking you now, and were hoping you knew all along how much you meant to us To cherish his memory, he leaves his loving family that will miss him dearly his children Phyllis Laws-Waddell, Michelle E Laws and Stewart Laws (Beefy). His many Grandchildren Christina, Portia, Rachel, Turiel, Martin, Ronald, Daneen, Charles, Aliyah, Lattice and Star. His Great Grandchildren Isiah, Anthony, Jada, Kayla, Tru, Noah, Nate, Ayden, Autumn and Rhythm. His loving sisters who were there for him throughout his illness, Shirley, Dorothy, Iris, Cathy, Thomasina and Sandra.. His brothers Leon, William and sister in law Kim. Edward was a true man of his word and was passionate about his family and leaves to cherish a host of nieces, nephews, cousins and friends that were truly blessed to have him in their lives. Preceding him in life was his oldest son Edward Laws (Lucky), His first grandson Jordan A. Laws. His sisters Lillian Williams, Marion Williams his brother Charles Laws and his great grandson Kenneth Juron

The family of Edward Holmes Laws created this Life Tributes page to make it easy to share your memories.

Send flowers to the Laws family.