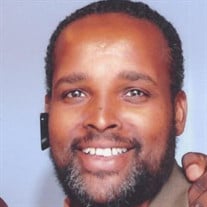 Rev. Edward Marcus Pratt was called home to be with the Lord on Sunday, February 21, 2021. He took his last breath at Tidelands Georgetown Memorial Hospital in Georgetown, South Carolina. Born August 31, 1961, in Winnsboro (Fairfield County), South Carolina, he was the youngest of three sons born to the late Deacon Columbus Pratt and Frances Kennedy Pratt. Edward graduated from Winnsboro High School in the Class of 1979. He enrolled at Midlands Technical College where he studied Computer Technology. He enlisted in the United States Navy and trained in Great Lake, Illinois. He returned to Winnsboro and was employed in the construction industry for seven years. He was then employed by the South Carolina Board for Technical and Comprehensive Education, and later at Belk Distribution Center. In 1986, he met the love of his life, the former Charlene Henderson, and they married November 24, 1986. To this loving union, a daughter Ashley Charlene was born. In 1993 he was called and in 1996 ordained into the ministry - Anointed Christian Ministries, which he co-founded with his wife. In 2000, he enrolled at Columbia Bible College (CIU). He dedicated his life to full-time ministry and served the Lord in many capacities. In addition to his parents, Edward was preceded in death by his two brothers: William Anderson Pratt and Joseph Franklin Pratt. He leaves to cherish precious memories his wife of thirty-four years, Charlene H. Pratt of the home; a daughter Ashley (Rev. Justin A.) Williams of Columbia; a granddaughter Kimberly Nicole Williams; two grandsons: Tristian Kaiden Williams and Connor Grayson Williams; seven nieces: Shontalette, Regina, Alexis, Tiffany, LaPrincess, Darlene, and Kelsey; five nephews: Allan, Devin, Christopher, Frank III, and Reginald; two beloved brothers-in-law: Reginald (Sandra) and Rodney; two beloved sisters-in-law: Luretha and Dorothy; a host of aunts, uncles, cousins and dear friends.

The family of Rev. Edward Marcus Pratt created this Life Tributes page to make it easy to share your memories.

Rev. Edward Marcus Pratt was called home to be with the Lord...

Send flowers to the Pratt family.