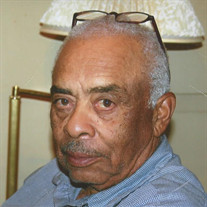 Edward Murry Stroman, known as “Baby-Jack” as named by his brother Richard, transitioned from earth to his heavenly home on Saturday, January 20, 2018, at Palmetto Health Richland in Columbia South Carolina. Born July 15, 1933, in Springfield, South Carolina, he is the son of the late Melton and Clyde Tyler Stroman. Jack enlisted in the United States Army and was stationed in Denver, Colorado. Upon his discharge, he returned home and attended Denmark Technical College for studies in Barbering and Masonry. Jack met the love of his life, Annie Baker, at church, and they married in 1962. Their union was blessed with three sons: Edward Stroman, Reggie Stroman, and Anthony Stroman. Jack is also the father of Darryl Stroman, Shelly Livingston, Larry Seawright, and Robin Mayes. Jack was very passionate about construction, and his work was widely known and admired, especially by his church congregation. He was very dedicated to his work at Smyrna Missionary Baptist, serving as Chairman of the Trustee Board. He faithfully fulfilled his charge of the financial and physical maintenance of the church. Jack was proud of the work that he did. A lover of nature and hard work, he frequently enjoyed walks in the woods near the creek, hunting, fishing, and working in the neighborhood to ensure the homes of his neighbors were safe and secure. In addition to his parents, Jack was preceded in death by his sister, Lizzie Mae Stroman Ware. Jack leaves to cherish precious memories his devoted wife, Annie B. Stroman; six sons: Anthony Stroman, Everett (Pam) Stroman, Fitzgerald (Annette) Stroman, Darryl Stroman, Shelly (Lillie) Livingston, and Larry (Patrice) Seawright; a daughter, Robin Mayes; fourteen grandchildren; great-grandchildren; a brother, Richard Stroman; and a host of other relatives and friends who will miss his daily presence in their lives.

The family of Edward Murry Stroman created this Life Tributes page to make it easy to share your memories.

Edward Murry Stroman, known as “Baby-Jack” as named by his brother...

Send flowers to the Stroman family.