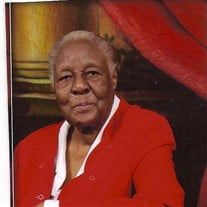 “And He said unto me, My grace is sufficient for thee; for my strength is made perfect in weakness. Most gladly therefore will I rather glory in my infirmities, that the power of Christ may rest upon me.” II Corinthians 12:9 “Mother” Eleanor Ophelia Bowens Holmes, a quiet and dignified lady, was born on June 28,1920 in Mayesville, South Carolina. She was the daughter of the late Rosa Smith Bowens and Hughie Bowens. She was united in holy matrimony to the late William N. “Bubba” Holmes. Mother walked ten miles each day from Maysville to Sumter to receive her education in the public schools of Sumter County. Her determined spirit and value of education resulted in her graduating from Lincoln High School and attending Morris College. While in her youth she converted and became a member of Beulah AME Church. In 1961, she received the gift of the Holy Ghost at New Hope C.O.G.I.C., where she was a faithful member for more than 50 years. Mother proudly served in many areas furthering the gospel of Jesus Christ while at New Hope. She was a member of the International Women’s Council where she served as Local Missionary President for 21 years. She was a member of the Mother’s Board, the Usher Board, and a Sunday School Teacher. In addition, she served as the Missionary State Chaplin, Chairperson of the South Carolina State Missionary Banner Committee. Mother was the recipient of many awards, plaques, and honors including the Mother Inez Heyward award given to women with outstanding service in the field of missions. Mother was a dynamic witness and inspirational speaker for our Lord and Savior, which was sincerely appreciated by many. She dedicated her life to His service and many sacrifices to always further the cause of Christ. In her community, Mother let the light of Christ shine by sponsoring the Feed A Child program and trips to Carowinds from her home. She helped to establish the day care center at Friendship Apartments. Mother was known and respected throughout her community for her kindness and wisdom. In 2010, she was awarded and honored by Sumter County with a Proclamation for Mother Eleanor Holmes Day and a Congressional Citation from the office of United States Congressman Charles Rangel. Mother was preceded in death by: two children, Susan Emma Holmes and Lillian Ophelia Holmes Gardner; three brothers: Hughie Bowens, Cleo Bowens, and Wylie Bowens; and one sister Lottie Bowens Peterkins. She leaves to cherish her memories and honor her life, a loving family: five daughters: Iris Mack, Cathy Holmes (Dorrill), Thomasina Holmes, Sandra Holmes, Shirley Johnson, all of Sumter; three sons: William Holmes (Kim), Frederick Leon Holmes (Kelly), Edward Laws Holmes, all of Sumter; a sister-in-law, Creola S. Bowens of Sumter; cherished as her own Debbie Bowens Davis;a lifelong friend Janie Ophelia Witherspoon; special friend Freda Creekmore all of Sumter; and a host of other relatives and dear friends. “Her children arise up, and call her blessed…Many daughters have done virtuously, but thou excellest them all.” Proverbs 31:28-29

&#8220;And He said unto me, My grace is sufficient for thee; for my strength is made perfect in weakness. Most gladly therefore will I rather glory in my infirmities, that the power of Christ may rest upon me.&#8221; II Corinthians 12:9 &#8220;Mother&#8221;... View Obituary & Service Information

The family of "Mother" Eleanor Bowens Holmes created this Life Tributes page to make it easy to share your memories.

“And He said unto me, My grace is sufficient for thee; for my...

Send flowers to the Holmes family.