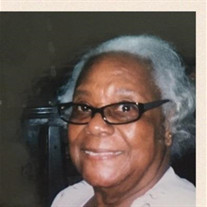 Elizabeth Craddock Kitson was born March 20, 1918 in Eufaula, Alabama. She was the beloved daughter of the late Carrie Bruce and Harrison Grimes. Elizabeth was schooled in Eufaula, Alabama, graduating from Van Buren High School. In 1934, she was united in Holy matrimony to Roy (“RC”) Craddock Jr. with whom she shared over 20 years of marriage. Out of this union was born two children, Roy Craddock III, and Eunice Craddock. Elizabeth and Roy were part of the great migration of blacks leaving the South heading North. Roy and Elizabeth along with their two young children moved to Hartford, Connecticut in the 1940s. Elizabeth settled in as a young housewife, caring for her children and husband. Elizabeth loved people, especially working with the youth. Her first adventure in the workforce was working in Tobacco Warehouse, where her skills and abilities were recognized and she became a supervisor; responsible for training the newly hired help. Elizabeth moved onto other employment, and was employed at McCook Memorial Hospital and retired in 1976. Her love for working with young people was evident throughout the community and she was hired to serve as the “House Mother” for Amistad House in Hartford, Connecticut a newly created group home for “trouble teens, and Day Care Center. Elizabeth was predeceased by her husband Roy Craddock, Jr. and predeceased by husband Raphael Kitson. She was also predeceased by her Grandson, Luda Edward Jones, Jr. She departed this life (earthly realm) January 15, 2016, just shy of her 98th Birthday. At an early age she was baptized at St. John’s A.M.E. church in Eufaula, Alabama. After moving North, she became a Roman Catholic, joining St. Benedict’s Roman Catholic Church. Eventually returning to her roots she became a member of Bethel AME Church in Bloomfield, CT. She moved to Columbia, SC and joined Reid Chapel A.M.E. Church in 2007. Elizabeth leaves to cherish a lifetime of memories, her son Roy Craddock III, (Rosalyn) of Manchester, CT and daughter Eunice Craddock Jones, of Columbia, SC. Five grandchildren, Michelle Jones-Williams (Rev.Gregory) of Columbia, SC; Monique Jones (Kevin) of Hanover, MD; Cynthia Craddock of Chicopee, Mass; Cheryl Craddock of Manchester, CT and Clayton Craddock of New York, NY. As Matriarch, she leaves to cherish her memory, Great Grand children; Ryan A. Jones-Stanchfield of Hartford, CT, Kohlbi McPhail, Wynter Williams, of Columbia,SC. Sahaar and Naseen Craddock, New York, NY; Kevin Jones, Jr and Edward Jones of Hanover, Maryland. Alexzander Williams of MD and GeAnna Williams, VA. Great, Great Grandchildren, JaSaan and Jilani Harrington of Columbia, SC, Aziah, Azekiel and Azaiver Williams of MD. A host of nieces, nephews, cousins; in-laws and friends throughout the United States. Elizabeth was an excellent Cook also enjoyed Crossword and Word Search Puzzles, and occasionally Pokeno and “Pitty-Pat” cards. Most of all she loved her family and the young people. She was “Nana” to many, and was articulate in expressing herself, and instrumental in shaping so many lives and was always there for you when you needed her.

Elizabeth Craddock Kitson was born March 20, 1918 in Eufaula, Alabama. She was the beloved daughter of the late Carrie Bruce and Harrison Grimes. Elizabeth was schooled in Eufaula, Alabama, graduating from Van Buren High School. In 1934, she... View Obituary & Service Information

The family of Elizabeth C Kitson created this Life Tributes page to make it easy to share your memories.

Send flowers to the Kitson family.