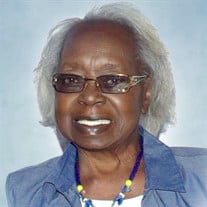 Emma Prioleau was born September 15, 1937 in Sumter, South Carolina. She was the eldest daughter of nine children born to the late Mr. Samuel Prioleau, Sr. and Mrs. Emma Brown Prioleau. "We do not weep as those with no hope, but as those who stand on God's promises to grant us wisdom, understanding and strength to bear our sorrow." Emma was educated at the Catchall Spann School of Dalzell, South Carolina. She was employed as a civil service employee on Shaw AFB, Morris College, and later retired from the former Sumter School District Two. Emma most especially enjoyed four very special things in her life; her yard, her garden, her chickens and her grands. At an early age, she was converted and became a member of High Hills African Methodist Episcopal Church, Sumter, South Carolina. Emma served faithfully in many capacities throughout her lifetime including membership on the Usher Board under the leadership of Mr. Stepney Gadson, Steward Board #2 and the Women's Missionary Society. The hour glass, with its sand of time, has slowly but surely spilled its contents and when the last grain of sand passed, so did the life of our dear Emma. God saw it safe to bring His faithful servant home. “Sunset and evening star and one clear call for me! And may there be no moaning of the bar when I put out to sea." Death has no sorrow that heaven cannot heal. We weep because we'll miss her presence and her enduring love. We rejoice because we know she's in God's hands, where she will no longer suffer any more pain, but will find eternal comfort. She leaves to cherish her precious memories, three children: Margaret (Jackson) Sanders, Rembert, Robert Prioleau of Dalzell, and Patricia Wheeler of Gable; four sisters-in-law, Martha Lou Alice, Mary and Janie Prioleau all of Dalzell, SC; five grandchildren, Derrick, Daryl, Corey, Andrea and Alyssa; nine great-grandchildren: Amyia, Nigel, Corez, Jakya, Corryn, Kori, Jayla , Elijah and Au'bri; two very special nieces and one nephew that she helped to rear in the home: Ioma L. Prioleau, Joan E. Downing and Tyrone E. Wade; two other special nieces: Alice Prioleau and Carol Lee Wells and a host of cousins and other relatives. In addition to her parents, she was preceded in death by eight siblings:, Allen , Alex, Sr. Rosa Lee Roosevelt and John Henry, Mary, Samuel Jr. and Vermell.

Emma Prioleau was born September 15, 1937 in Sumter, South Carolina. She was the eldest daughter of nine children born to the late Mr. Samuel Prioleau, Sr. and Mrs. Emma Brown Prioleau. "We do not weep as those with no hope, but... View Obituary & Service Information

The family of Emma Prioleau created this Life Tributes page to make it easy to share your memories.

Send flowers to the Prioleau family.