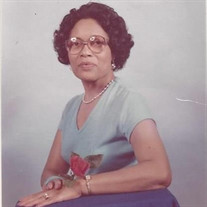 Mrs. Estoria Turner Jones passed away on Thursday, June 11, 2020. Born in New York, New York, she was the daughter of the late Daniel and Metta Hanna Turner and the widow of the late Thomas L. Jones, to whom she was married for thirty-nine... View Obituary & Service Information

The family of Estoria Turner Jones created this Life Tributes page to make it easy to share your memories.

Send flowers to the Jones family.