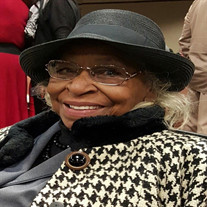 Ethel Jane Gordon affectionately known as “Granny”, was born in 1924 in Hope Hull, Alabama to Elbert and Callie Chappell. She departed her life on May 17, 2019. Ethel’s father was a farmer that supported his family of 10 children. Her family moved from Pittsburgh, PA to Hope Hull in the early 1920s where Ethel was born and raised. In 1944, Ethel met the love of her life Samuel Gordon while working in Tennessee. On May 8th, they caught a Trailways Bus to Walker County, Georgia, eloped and moved to Greenville, SC. Ethel was an entrepreneur. Ethel and Sam own several restaurants from 1950 -1980, everyone would come to get some of Granny’s great cooking. Ethel and Sam raised three children: Barbara, Sarah and Joseph. In 1972, Sam and Ethel decided to move to Richmond, Va., where Ethel lived until 2009. From 2009-2012 she lived in Montgomery, Alabama, to care for her sister, Ida. In 2012 she moved to Columbia, SC, until her final day. In 1966, Ethel dedicated her life to Jehovah God by baptism, along with her daughter Barbara. She continued to serve Jehovah faithfully until her death. Ethel was preceded in death by her parents; nine siblings; her husband Sam; oldest daughter Barbara Jean; step-daughter Joanne Maddox; and two grandchildren: Eric Gordon and Janice “Jackie” Dendy. Ethel leaves to cherish her memories, one son Joseph (Nancy) Gordon of Cleveland, OH; two daughters: Sarah “Kitten” Gordon of Bedford Heights, OH, and Barbara Ann Vernon of Detroit, MI; four grandchildren: Beverly Cox of Richmond, VA, Brenda (Micheal) Myers of Columbia, SC, Deborah (Thomas) Taylor of Sandston, VA, and Joseph (Tamie) Gordon of Cleveland, OH; special granddaughter Shelly “Shirley” Myers; nine great-grands (Lakeisha, Jerome “Bootsy”, Brittney, Ron, Chanice, Thomas “Cubbie”, Brenay, Aubria, and Jameson; seven great great-grands and one great great great grand; her godson, Joseph Bell of Richmond, VA; and a host of nieces, nephews and other relatives and close friends who will miss her smile and wisdom.

The family of Ethel Jane Gordon created this Life Tributes page to make it easy to share your memories.

Send flowers to the Gordon family.