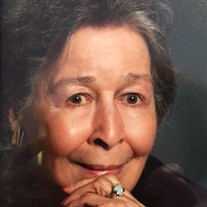 Eva Patricia Jackson was born in Columbia, South Carolina on January 14, 1924 to the late Isadore Harry Goodwin and Arabella Eunice Lewie. Pat, as she was affectionately called, was a devoted and faithful Christian, who had her foundation at St. Luke's Episcopal Church from childhood. After graduation from Booker T. Washington High School, she attended both Allen University in South Carolina and Howard University in Washington, DC. Eva (Pat) worked for the Treasury Department during World War II. It was there she met her future husband Charles (Chuck) Sumner Jackson, a member of the Tuskegee Airmen. The couple married in Tuskegee, and to this union were born two children Charles Stephen and Denise Eva. Upon's Chuck's discharge form the Air Force, they moved to Chicago, Illinois, where they lived and worked until retirement and relocation to Columbia, South Carolina in 1982. Pat spent her the bulk of her professional career with Supreme Life Insurance Company of America moving through the ranks from Keypunch Operator to Vice President for Computer Operations, becoming the first female VP appointee in the history of the company owned by John H. Johnson, founder of the Johnson Publishing Company. Pat enjoyed a rich social life in Chicago where she attended many civic and community events. She loved to dress up and was always stylish, whether going to an event, work, or simply the grocery store. This trend continued until she was in her 90s; she could be found at church each Sunday with her hat, gloves, jewelry, and a purse to match her shoes! Mama (as her children called her) enjoyed cooking, knitting, crocheting, sewing, and loved working in her garden. She also loved to travel, and in her 80s traveled to Paris, Scotland, Puerto Rico, and several locales within the United States. Mama lived by the quote (from an unknown author) "I want to live life so fully that when I'm gone, there is nothing left but a burned out shell.: Until the very end, Mama was engaged in conversation, expressing her opinion, and yes, telling people what to do. She was a loving and caring wife for fifty-seven years, a devoted mother, and the proud grandmother of two grandchildren. In addition to her beloved husband Charles, Pat was preceded in death by both parents, her brother Isadore Harry Goodwin, and her sisters; Harriet Liverman-Titus, Doris Hall, and Eunice Hughes. She leaves to cherish her precious memory her children: Charles (Stevie) Stephen Jackson and Denise Eva (Howard) Johnson; two grandsons: Howard and Charles; a sister Arabella G. Tate; brothers-in-law: Arnold Jones and Robert Hughes; a sister-in-law Fannie Goodwin; and a host of nieces, nephews, cousins, and friends. In lieu of flowers, the family requests that memorial donations be made to St. Luke's Episcopal Church.

Eva Patricia Jackson was born in Columbia, South Carolina on January 14, 1924 to the late Isadore Harry Goodwin and Arabella Eunice Lewie. Pat, as she was affectionately called, was a devoted and faithful Christian, who had her foundation at... View Obituary & Service Information

The family of Eva Patricia Jackson created this Life Tributes page to make it easy to share your memories.

Eva Patricia Jackson was born in Columbia, South Carolina on...

Send flowers to the Jackson family.