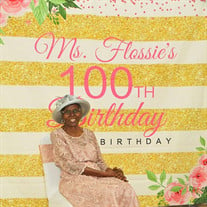 Flossie Delores Cousar, a 101 year old centennial, departed this life on January 25, 2021. She was born to the late Sam Thomas and Queen Esther Coker Cousar. She was the fifth child and first daughter of ten boys and six girls. She became the reigning matriarch of the family after her mother’s passing in July of 1980. Ms. Flossie attended the Rosenwald School and St. John School in the Shiloh-Lynchburg area of South Carolina. After graduating high school, she was the first in the family to pursue post-secondary education. She received a Bachelor’s of Science degree in Home Economics from Allen University. After teaching many years ---first at the local Johnson High School, then additional years of teaching in Hampton, St. Stephens and Lamar--- she studied and successfully matriculated at the South Carolina State University and was conferred the Masters of Arts in Education Degree. Ms. Flossie taught for a total of 42 years in the state of South Carolina before her retirement in 1984. After retirement, Ms. Flossie continued to serve in her community and church. She tutored at the Shiloh Community Center until 2003. At the church where she was reared, Mount Sinai AME Church, she also served for many years in many capacities: secretary, Sunday School Teacher, pianist, a member of the gospel choir, stewardess, and missionary. She held the position of Lifetime Missionary with the Seventh Episcopal District of the African Methodist Episcopal Church. Ms. Flossie participated in extensive travel throughout the United States with the AME church and also abroad to Israel, Puerto Rico, Barbados, St. Thomas, and other countries. She was preceded in death by her parents Sam and Queen Coker Cousar and siblings: Kernal, Carolina, Talmon, Marion, George, Johnnie, Sam Thomas, Jr., Vernal, Rawleigh James, Frank, Claracy, Nellie, Rebecca, and Minnie Lee. She leaves to mourn her passing; three sisters: Sallie (Leon) Taylor of Hackensack, NJ, Willie Mae Quattlebaum of Bronx, NY, and Eliza J. Bethea of Lynchburg, SC; sisters-in-law: Mable (Marion), Ada (Vernal), and Miriam (Rawleigh). Also, a host of nieces, nephews, cousins, relatives, and friends. Services are entrusted to: Palmer Memorial Funeral Home 304 S Main St. Sumter, SC Interment will follow at Edwards Cemetery in Shiloh, Lynchburg, SC 29080 Services will be lived streamed on OUR FACEBOOK PAGE:PALMER MEMORIAL CHAPEL, INC

Flossie Delores Cousar, a 101 year old centennial, departed this life on January 25, 2021. She was born to the late Sam Thomas and Queen Esther Coker Cousar. She was the fifth child and first daughter of ten boys and six girls. She became the... View Obituary & Service Information

The family of Flossie Delores Cousar created this Life Tributes page to make it easy to share your memories.

Send flowers to the Cousar family.