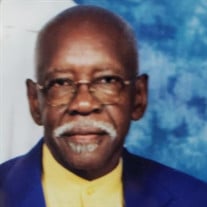 In the early morning hours of Wednesday, April 8, 2020, Franklin D. Flemming departed this earthly life to be with the Lord. Born March 3, 1933, in Eastover, South Carolina, Franklin, a natural leader, was the eldest of seven children born to the late Ruffin and Doretha Nixon Flemming. Destined for greatness, Franklin was named by his grandmother, in recognition of the 32nd President of the United States. Lovingly called "Roosevelt" or "Velt" by Eastover family and friends, Franklin was educated in RIchland County and attended Cross Roads and Webber public schools. He continued his education at Denmark Technical College, earning a degree in Masonry Science. In 1959, Franklin married his lovely bride, the former Bernetha Hall of Swansea, South Carolina. This union was blessed with three sons, who the couple raised in Columbia's Greenview and Killian communities. Together, Franklin and Bernetha shared a blessed and happy life, positively impacting many communities through their joint civic, religious, and neighborhood leadership. Their strong and loving marriage endured for fifty-two years until Bernetha was called to her eternal home on June 11, 2012. At an early age, Franklin accepted the Lord and attended Goodwill Baptist Church (in Eastover), where he served on the Deacon Board for many years. Later Franklin continued faithful service at Greenview Baptist Church and Reid Chapel AME Church (both in Columbia), where he worked on various community ministries and mentored youth as a baseball coach and Boy Scout Troop Leader of the first troop organized at Reid Chapel. For decades, Franklin served his nation honorably: as a soldier in the United States Army from 1951-1954, and as a dedicated civil servant for thirty-five years with the Army Directorate of Engineering at Fort Jackson. After retiring in 1988, Franklin and his family enjoyed many good times traveling, hunting, fishing, horseback riding, farming, and cruising in his antique 1951 Chevrolet. Known for his humorous wit, boisterous voice, and knack for "telling it like it is," Franklin was the life of any party. Outgoing and friendly, he would strike up entertaining conversations with everyone who crossed his path. Friends and family will fondly remember him as a smart, hardworking, good man who kept everyone laughing. In addition to his parents and beloved spouse, Franklin was preceded in death by his adoring grandmother Maude Smith Wells; his younger brother, Willie James Flemming; and a special uncle, Robert Lee Smith, Jr. He leaves to cherish precious memories three sons: Carl (Carmen) Flemming of Blythewood, South Carolina, Cedric (Alice) Flemming of Dallas, Texas, and Ruffin Ali Flemming of Ridgeway, South Carolina; three grandchildren: Carl (Symone) Flemming II, Courtney Flemming (Lynell) Odie, and Cameron Franklin (Shayna) Flemming; five great-grandchildren: Omari, Lynell Jr., Caitlyn, Luis, and Josiah; sisters: Florence Flemming, Ruby Washington, and Hazel Flemming, all of Eastover; two brothers: James Lee Flemming of Eastover and Charles Flemming of Columbia; an aunt Bernice Smith of Eastover; a brother-in-law Stanley (Linda) Hall; three sisters-in-law: Iva Mae Hall of Swansea, South Carolina, Yvonne Hall of Columbia, and Diane Hall of Chester, Virginia; and a host of other loving nieces, nephews, cousins, relatives, and loving friends who will miss him dearly forever.

In the early morning hours of Wednesday, April 8, 2020, Franklin D. Flemming departed this earthly life to be with the Lord. Born March 3, 1933, in Eastover, South Carolina, Franklin, a natural leader, was the eldest of seven children born... View Obituary & Service Information

The family of Franklin D. Flemming created this Life Tributes page to make it easy to share your memories.

Send flowers to the Flemming family.