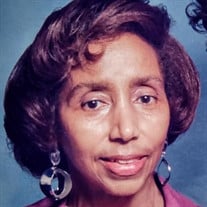 Mrs. Frazelia Corley Crumlin, wife of the late Rev. Lindsey Crumlin, Sr., departed this earthly life to join her heavenly Father on Thursday, December 31, 2020, at the residence of her daughter in Columbia, South Carolina. Born in Washington, DC, on September 24, 1925, she was a daughter of the late Paul and Lillian Bird Corley. She was a graduate of Booker T. Washington High School in Columbia, South Carolina, earned a Bachelors of Arts degree in Education and Teaching from Bennett College, a historically Black institution in Greensboro, North Carolina. After graduation, Ms. Crumlin taught at Carver Elementary School in Columbia 35 years. After her retirement, she continued to share knowledge with the community and students. She was formerly a library assistant at Heathwood Hall Episcopal School where she shared her time, skills, and resources in helping students, especially her granddaughter Lynette. Formerly a member of St Luke Episcopal Church, she later transferred her church membership to Frances Burns United Methodist Church, where she was an active member of the congregation until the time of her death. Mrs. Crumlin, as she was affectionately called, was a loving and involved mother, grandmother, and great-grandmother. She cherished every moment spent with her family. She also dedicated her leisure time to reading the Bible, singing gospel hymns, and working outside in her yard, as much as possible. In addition to her parents and husband, she was preceded in death by two brothers: Paul J. Corley, Jr., and John H. Corley, Sr.; and a granddaughter Lynette Spigner. A day later her sister, Juanita Corley Hall, followed her to glory; after being so close in life, the sisters were quickly reunited in paradise. It was surely God’s plan. She leaves to cherish precious memories two children: her son Dr. Lindsey E. (Stacy) Crumlin, Jr., of Lexington, South Carolina, and daughter Cynthia Spigner of Columbia; two grandsons: Lindsey Crumlin, III, and Michael Goins; a granddaughter Courtney Crumlin; a great-grandson Stacy E. Watson; a special niece Yvonne Hall; and a host of other relatives and close friends.

The family of Frazelia Corley Crumlin created this Life Tributes page to make it easy to share your memories.

Send flowers to the Crumlin family.