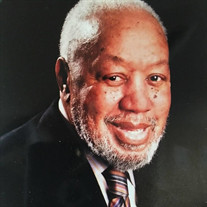 “If I have helped someone along the way, then my living has not been in vain….” Dr. Frederick Austin Craig, affectionately known as “Skeeter” and “Sonny,” departed this earthly life on Thursday, June 7, 2018, at his residence on Hilton Head Island, South Carolina. Born on April 28, 1932, in Selma, Alabama, he was the youngest of three children born to the late Sarah Frances Matthews Craig and Thomas Craig. He attended Fisk University where he was a pre-med major and earned his Bachelor of Science degree in 1954. While at Fisk, he played football, basketball, and pledged with the Alpha Phi Alpha Fraternity, Inc. He served his country in the United States Army for two years before returning to Fisk to complete his Masters of Arts degree. After earning a Master’s, he matriculated at Meharry Medical College School of Dentistry in 1963 and completed his internship and residency in Oral and Maxillofacial Surgery at the University of Pittsburgh in 1967. In 1967, Dr. Craig also began his private practice and served as the Dental Director of the Chicago Model Cities Program. His skills as an oral and maxillofacial surgeon earned him numerous opportunities to lecture and provide professional development training to aspiring dental professionals. Frederick was first baptized and began his Christian journey at the Green Street Baptist Church in Selma, Alabama, as a child. His journey culminated after moving in 1999 to Hilton Head Island, when he and his wife joined and became dedicated members of the Queen Chapel African Methodist Church where he served with the Men’s Club and the Sons of Allen Men's Ministry. His community involvements were numerous and included: helping handicapped individuals through Heroes on Horseback, active Life Member of the National Dental Association, member of Epsilon Mu Boule, member of Alpha Phi Alpha Fraternity, Inc., Lincoln Dental Society, and a dedicated supporter of Meharry Medical College. He was an avid art collector, sports and music enthusiast, and a fantastic cook (his specialty was short ribs with wine sauce). He was also known for his delight and dedication when mentoring young and old people from all walks of life. He was a man whose greatest joy was to be a guiding light to others. He was married to the love of his life, the former Shirley Turnley Dorsey, who he met at Fisk University. The couple enjoyed traveling extensively to unusual places both near and far. They took time to enjoy many Blues and Jazz Cruises. In addition to his parents, Frederick was preceded in death by his brothers: Lorenzo Craig and Thomas Craig. He leaves to cherish precious memories his loving and dedicated life mate, Shirley Turnley Dorsey Craig; his three children: Maria Theresa (Celso) White, Martin (Rowena) Dorsey, and James Dorsey; nine grandchildren; nephews: Lorenzo, Jr., Michael, Ernest, Marvin, Thomas, and Roderick; grand-nephews: Lorenzo, III, Steven, and Sean; nieces, cousins, and a host of other relatives and friends. In lieu of flowers, memorial contributions may be made to Meharry Medical College, Attn: Institutional Advancement 1005 Doctor D.B. Todd, Jr. Blvd. Nashville, TN 37208.

The family of Dr. Frederick Austin Craig created this Life Tributes page to make it easy to share your memories.

“If I have helped someone along the way, then my living has not...

Send flowers to the Craig family.