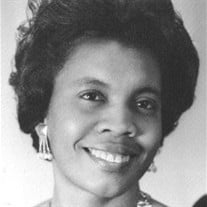 Geneva Powell Johnson Maxberry departed this life on January 1, 2018, in the comfort of the home she loved. She was born September 16, 1922, to very proud parents, Mr. Hannibal Powell and Mrs. Mary Jones Powell. Geneva was the third child born to this couple, and she received her formal education in the public schools of Richland County School District One. On July 5,1940, she married the late John Wade Johnson, Sr. The union was blessed with the birth of four sons: the late John Wade Johnson, Jr., Donald Curtis Johnson, Avery Johnson, and Clarence George Johnson. As a staunch advocate of education, Mrs. Maxberry advanced her studies of Library Science at Allen University and Benedict College during the summer months while proudly serving in Library Services for Booker T. Washington High School and the University of South Carolina for over 25 years until retiring in 1975. She was blessed to find love again 10 years after the untimely death of her first husband. On August 20, 1962, she became the blushing bride of the late (SFC-Retired) Joseph Rodgers Maxberry, Jr. This union was blessed with the birth of one son, Joseph Rodgers Maxberry, III. A gregarious and highly personable lady, Geneva enjoyed her years of library service and truly tried to help everyone she encountered. She's been a dedicated and hardworking member of Sidney Park CME Church for over 50 years. Likewise, she's been an integral part of her community with her membership in the Excelsior Club, the Loyal Ladies Society, the Sidney Park Missionary Society (lifelong member), The Shepherd's Center, Mammoth Tea past queen, and a host of other organizations. She loved her family dearly, but she loved God most. She leaves to mourn her passing four sons: Donald (Edith) Johnson, Avery (Dorothy) Johnson, Clarence (Myrtle) Johnson, and Joseph (Michelle) Maxberry, III; nine grandchildren; five great-grandchildren; and a host of relatives and friends.

Geneva Powell Johnson Maxberry departed this life on January 1, 2018, in the comfort of the home she loved. She was born September 16, 1922, to very proud parents, Mr. Hannibal Powell and Mrs. Mary Jones Powell. Geneva was the third child... View Obituary & Service Information

The family of Geneva Powell Johnson Maxberry created this Life Tributes page to make it easy to share your memories.

Send flowers to the Maxberry family.