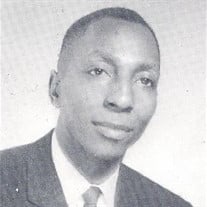 On Saturday, February 22, 2020, the Lord called another soul from earthly labor to heavenly reward. George Eddie Gladman, Jr. quietly took his last breath at Agape Hospice House. Born October 12, 1933, in Columbia, South Carolina, he was the third of six children born to the late George Sr. and Sarah Feggins Gladman. Educated in Richland County Public Schools, he was a 1954 graduate of Booker T. Washington High School. George went on to Allen University and in 1958 earned a Bachelor of Arts in Physical Education. After graduation, he worked in several Columbia area schools before leaving to become the Athletics Director at Kittrell Junior College in Kittrell, North Carolina, where he also coached the football and basketball teams. While at Kittrell, George met and married the former Montrose Burks. To this union, three children were born: Charnita, Tijuana, and Christopher. George worked as a teacher in both the Charleston and Beaufort County school districts. In 1968, he broke color barriers when he began working as a driver for Greyhound Bus Lines, which allowed him to visit many new locations across the country. One of the first three Black drivers hired by Greyhound nationally, George not only drove the regularly scheduled passenger routed, but he also drove charter routes for teams, bands, and church groups (this was prior to independent charter bus companies). George continued working for Greyhound and Southeastern Stages (who purchased Greyhound) until his retirement in the 1990s; additionally, he drove charter buses all over the country. George also worked in Richland County School District Two. In addition to his parents, George was preceded in death by two siblings: a sister, W. Pearl Gladman, and a brother, William D. Gladman. He leaves to cherish precious memories his three children: Charnita (Clarke) Patterson of Blythewood, South Carolina, Tijuana Gladman of Columbia, and Christopher Gladman of Orangeburg, South Carolina; two sisters: Hattie Mae Barclay of Washington, DC, and Cora G. Pugh of Columbia; one brother Ervin L. (Daisy) Gladman of Columbia; loving nieces, nephews, great-nieces, great-nephews, and other relatives and friends who will miss him.

The family of George Eddie Gladman, Jr created this Life Tributes page to make it easy to share your memories.

Send flowers to the Gladman, family.