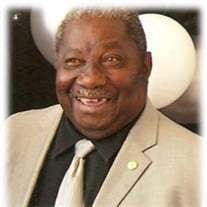 George David Haigler was born August 14, 1943 to the late Preston and Rose Haigler, Sr. in Orangeburg, South Carolina. He departed this life Saturday, August 1, 2020 at PruittHealth in Columbia, South Carolina. He was the 9th child of 11 children and the baby boy. After being educated in Orangeburg County Schools, George moved to Bradenton, FL where he worked as a pipelayer. He left Florida and moved back to Orangeburg, SC for a short period before moving to Columbia, SC where he met and married Ruby L. Woods. They moved to Queens, NY where their first child was born. After a short stay in New York, the Haigler family moved back to Columbia, SC. George loved to hunt and fish. He would hunt for big game animals such as deer; small game animals such as rabbits, raccoons, squirrels and possums; and birds such as turkeys, ducks and geese. He would go deep sea fishing, local lake and river boat fishing as well as fishing from the bank. George was a professional truck driver. He could drive anything that had wheels. He drove tractor-trailer trucks across the continental United States. He was serious about his driving. In 1977, he placed 2nd in the Dump Class at the South Carolina Truck Rodeo Competition . The very next year, 1978, he won the Championship for the same event. During his driving career, he drove cement mixers, log trucks, tankers, lumber trucks, rock trucks, sanitation trucks, heavy machinery, Trailways buses, school buses, and BlueRibbon cabs. He also worked as a security guard at Benedict College and transported sports team on the school’s coach (bus). George was very friendly and did not meet strangers. He had an infectious personality and enjoyed making family and friends laugh. George was preceded in death by three sisters: Elizabeth Mack, Ruth Clinton and Rosebud Franklin and one brother, Preston Haigler, Jr. Left to cherish fond memories, in addition to his wife of 58½ years, Ruby, are his daughters: George Ann Richardson of Orangeburg, SC; Joyce (James) Conyers of Lexington, SC; Tracy Haigler of Columbia, SC; sons: Carlos (Michelle) Haigler of Columbia, SC and Justin Haigler of Charleston, SC; nine grandchildren; nine great grandchildren; sisters: Pauline (James) Williams of Orangeburge, SC; Lurine Felder of Orangeburg, SC; Doreatha Worley of Orangeburg, SC; Cola Henderson of Charlotte, NC; and Minnie (Charles) Mitchell of Aiken, SC; a brother, John (Marris) Haigler of Orangeburg, SC; and a host of nieces, nephews and friends.

George David Haigler was born August 14, 1943 to the late Preston and Rose Haigler, Sr. in Orangeburg, South Carolina. He departed this life Saturday, August 1, 2020 at PruittHealth in Columbia, South Carolina. He was the 9th child of 11 children... View Obituary & Service Information

The family of George David Haigler created this Life Tributes page to make it easy to share your memories.

Send flowers to the Haigler family.