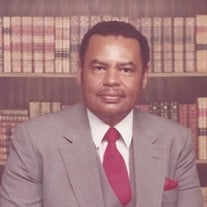 Rev. Dr. George William Watson, Sr., son of the late Ellison “Bubba” Watson and the late Fanny Watson Ingram, was born in Aiken, South Carolina on August 25, 1933. He entered into eternal rest on Tuesday, February 16, 2021, surrounded by family in Columbia, South Carolina. He attended Mather Academy, a private boarding school in Camden, South Carolina, for his formative education. He was a great athlete and enjoyed playing football in his younger years. George married his forever love of sixty-five years Adell Wilson Watson on August 16, 1955 in New York City. He later attended Claflin University in Orangeburg, South Carolina, where he joined Phi Beta Sigma Fraternity, Inc. and graduated Magna Cum Laude with a Bachelor of Arts in Religion and Philosophy in 1961. In 1966, he graduated Magna Cum Laude from the Gammon Theological Seminary in Atlanta, Georgia with his Master of Divinity degree. To compliment his degree in Divinity, George earned a certificate from Edinburgh University in Scotland in 1974. He holds an Honorary Doctor of Divinity degree from Claflin University. Once completing his education, George began his professional roles in the United Methodist Church throughout congregations in South Carolina. He served as the pastor of St. Mark United Methodist Church and Antioch/Shepherd United Methodist Church in Sumter; Bethel United Methodist Church in Marion; Old Bethel United Methodist Church in Charleston; and Trinity United Methodist Church in Orangeburg. In addition to his pastoral roles, George also served as the Chaplain for the College of Charleston, the Medical University of South Carolina, South Carolina State University, and the District Superintendent of Florence and Spartanburg. Within his ministry, George loved connecting with people, specifically the younger generation. He always encouraged young people to be better versions of themselves. He established the George W. Watson Endowed Scholarship at Trinity United Methodist Church. He served alongside his beloved wife Adell. From their union, they were blessed with two children: Jill Watson Asouzu and George William Watson, Jr., and their “adopted son,” the late Jimmie Lee Gadsen. Together, the couple broke many barriers for African Americans in the United Methodist Church in South Carolina and beyond. George was an accomplished man, holding several honors, accolades and memberships. To name a few, he served as a Delegate for the Jurisdiction and the General Conferences. He also was selected by Gov. Richard Riley to represent the clergy of South Carolina at the Presidential Prayer Breakfast in Washington, DC. He was a member of the NAACP; the Committee on Higher Education of South Carolina Conference; Board of Discipleship of the United Methodist Church; and the Claflin University International Alumni Association. In 1996, George retired in Spartanburg, South Carolina and later relocated to Orangeburg, South Carolina. In his retirement he enjoyed gardening, cooking, collecting antiques, reading, watching sports and traveling with his family. He continued to travel throughout South Carolina for pastoral engagements as requested and was heavily involved as a board member and chaplain for First Steps in Orangeburg County. His greatest joy in life was serving his community and his greatest strength was his ability to share the teachings of the Lord and bring people to the faith. Though a serious man at times, George will always be remembered for his quick humor and strong love for his family. In addition to his parents, George was preceded in death by his dear wife Adell Wilson Watson; his brothers Leon Watson, Sr. and Samuel Watson; and his brother-in-law Elgin “June” Wilson. He leaves to cherish his memories daughter Jill (Chris) Asouzu of Columbia, SC and his son George W. (Monique) Watson, Jr. of Spartanburg, SC. He will be especially missed by his seven grandchildren, who affectionately referred to him as “Papa,” four great-grandchildren; his sisters Sheila (Fred) Danforth of New Ellenton, SC and Shirley Patterson of Sumter, SC; his sisters-in-law: Catherine Watson of Washington, DC, Mary (George) Strader of Washington, DC, Deaconess Valeria (Robert) Miller of Capitol Heights, MD, and Rita Strange of Temple Hill, MD; and his brother-in-law Rev. Dr. Samuel (Norma) Wilson of Forestville, MD, and a host of beloved nieces and nephews. To view the livestream of the service, please use the link below: https://youtu.be/SQ8Lyu920KQ

The family of Rev. Dr. George William Watson, Sr. created this Life Tributes page to make it easy to share your memories.

Send flowers to the Watson, family.