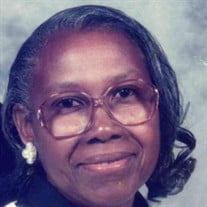 Gladys Louise Shipman Grate was born on March 4, 1932 in Loris, South Carolina. She was the youngest of 2 children born to the late William E. Shipman and Mary Booth Shipman. God saw that she had served her purpose and had grown weary so He called her to rest on January 1, 2022 at the home of her daughter in Columbia, SC. Gladys grew up working in tobacco fields and she obtained her education in Horry County Segregated School System. After completing school, she married the love of her life Mr.Joe Grate who preceded her in death and to this union three children were born Joseph Anthony Grate, who died at birth, Jonathan Kelvin Grate and Jolanda Anita Grate Sulton. While married and raising her family, she began working in the Horry County Public School System as a Teacher's Aide for over 20 years until retiring from Daisy Elementary School. At an early age, she joined Mt. Rona Missionary Baptist Church where she served on the Missionary Society and was the Mother of the church. She was a faithful member and was a no nonsense type of lady that believed in being decent and in order at all times. Gladys leaves to cherish her precious memories a son Jonathan Kelvin (Delores) Grate, Charleston, SC, a daughter Jolanda Anita Grate (Daryl) Sulton Columbia, SC.; six grandchildren Tremaine Antoine Grate, Terrell Keyon Grate, Alisha Shavaun Grate, Ashley Nicole Grate all of Charleston, SC, SPC Anwar (Jenna) Sulton of Ft. Huachuca, Arizona, and Yasmin Sanaa Sulton of Columbia SC. She had three step grandchildren Octavia Shawnta (Randy) McComb, Shawn (Antiqua) Gadsden, and Sharell La’Say Gadsden of Charleston, SC. She had eleven great grandchildren; two surviving sisters; Linda Brown of Tabor City, NC and Shirley Gregg of Charlotte, NC.; sisters-in-law Christine Smith, Rosa (Wendell) Boone of Longs, SC, Lucille Wilson of Allsbrook, SC, Betty Wilson of Michigan and Sharon Wilson of New York; two surviving brothers-in-law David (Beverly) Wilson of Conway, SC and Edward Wilson of Longs, SC, a very special friend Julia Faye Carter and a host of nieces, nephews, other family and friends. .

Gladys Louise Shipman Grate was born on March 4, 1932 in Loris, South Carolina. She was the youngest of 2 children born to the late William E. Shipman and Mary Booth Shipman. God saw that she had served her purpose and had grown weary so He... View Obituary & Service Information

The family of Mrs. Gladys L. Grate created this Life Tributes page to make it easy to share your memories.

Send flowers to the Grate family.