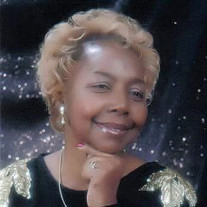 Glory “Gloria” Langston Williams born to Louise Langston Conyers and the step-daughter of the late James Conyers, was born on January 27,1945 in Cincinnati, Ohio and departed this earthly life on Wednesday, October 5, 2016 at Palmetto Health Tuomey. Gloria was educated in the public schools of Brooklyn, New York. She completed her studies and was a graduate of Clara Barton Vocational High School of Brooklyn, New York. On June 20, 1965, Gloria married Thomas L. Williams in Brooklyn, New York at the First Baptist Church of Crown Heights, New York. Rev. Clarence Norman officiated the ceremony. To this union, two daughters were born Toni Joyce Williams and Cheryl Patricia Williams Mack. Gloria was a faithful member of Solid Rock Baptist Church of Brooklyn, New York where Dr. Rudolph Jones was the pastor. She was a member of the Usher Board and the H.O. Payne Young Adult choir. After moving to the Sumter area, she joined Greater St. Paul Non-Denominational Church in October of 1980, where the late Bishop W.T. English was the pastor. Gloria demonstrated her commitment to the Lord by being a missionary, a member of the Senior Choir, and on the Usher Board as well as participating in other activities in the church. Mrs. Williams was an artistic person which was appreciated in many areas such as interior design and the landscaping of her home. Gloria’s gift of poetry was celebrated frequently on Lorin Peri Palmer’s talk show, “Family Forum” during the 90’s. She was fond of dining out with family and friends who valued her great sense of humor and laughter. Gospel music soothed her soul, favorite songs of Mrs. Williams’ included “Yes God Is Real” and “Lord I Thank You”. In addition to her husband, she was preceded in death by a sister Ernestine Hawks of Tucson, Arizona and a step-brother Manuel Conyers of Sumter and sister-in-law Evelyn Conyers also of Sumter. Those left to cherish precious memories are: two daughters, Toni Williams of the home and Cheryl Williams (Bruce) Mack both of Sumter; her mother Louise Langston Conyers, Gourdine, SC; two sisters, Betty Langston, Sumter and Nora Langston, Gourdine, SC; two step-sisters, Joan Mary Conyers and Anna Lee Green both of Lane, SC; one step-brother James Conyers of Lane, SC; three aunts Arlene Hendrix, Pooler, GA., Leteria Daughtry, Brooklyn, NY and Ruby Hamilton, Charleston, SC; one uncle, Roy Daughtry, Brooklyn, NY and a host of other relatives and friends.

Glory &#8220;Gloria&#8221; Langston Williams born to Louise Langston Conyers and the step-daughter of the late James Conyers, was born on January 27,1945 in Cincinnati, Ohio and departed this earthly life on Wednesday, October 5, 2016 at Palmetto... View Obituary & Service Information

The family of Gloria Langston Williams created this Life Tributes page to make it easy to share your memories.