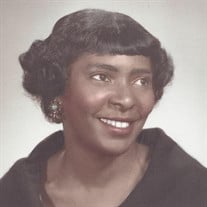 Mrs. Golda Bernetha “Bunch” Dixon, wife of the late Clarence H. Dixon, Sr., daughter of the late Governor M. Floyd and Jessie Butler Floyd died Thursday morning, April 27, 2017, in the Palmetto Baptist Hospital, Columbia, S.C. She was born in Newberry, S.C., on March 23, 1933. Bernetha attend the public schools of Newberry County and graduated from Allen University in 1955 with a degree in early childhood education. She was a passionate educator for 32 years. She started her teaching career at Black Street Elementary School in Walterboro, S.C. She then taught at Schweinfurt Elementary School, Germany, and Lee Hall Elementary School, Newport News, VA. She spent the majority of her very fulfilling teaching career at Meadowfield Elementary School in Columbia, S.C. from 1973 until her retirement in 1993; after retiring, she served for a number of years as a substitute teacher in the Richland County School District. She was united in marriage to the late Clarence H. Dixon, Sr. To this union two children were born; the late Clarence H. Dixon, Jr. and Jesse Caroline Dixon. To her family she was loving and faithful and strived to make them happy. She was an ideal wife and mother, a devout Christian as well as a real citizen of the community in which she lived. She chose Christ as her personal Savior early in life and was a member of Zion Canaan Baptist Church. Mrs. Dixon was preceded in death by her son Clarence H. Dixon, Jr. and her sister, Dorothy Mae Williams. Left to cherish her memory are a devoted daughter; Jessie Caroline Dixon and granddaughter Kimberly Demetrice Ford, both of Columbia, S.C.; a brother, Major (ret.) William Matthew Floyd, Sr., of Hampton, VA; 3 sisters: Helen C. Crawford, of Columbia, S.C., Jessie Deloris Floyd Marsh, of Newberry, S.C. and Barbara Jonell (PL) Ward, of Milledgeville, GA; a sister-in-law; Viola Forte, of Charlotte, N.C.; and a host of nieces, nephews, other relatives and friends who will miss her dearly.

The family of Golda Bernetha Dixon created this Life Tributes page to make it easy to share your memories.

Send flowers to the Dixon family.