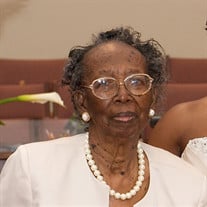 Gustave Dicks Holliday, better known as "Mrs. Gussie", was born in. Sumter, SC on January 26, 1912. She was a daughter of the late Rosa Dicks Williams Ballard and the late Dave Williams. She was united in marriage to the late Isadore Holliday. At a very early age "Gussie", as she was nicknamed, became hearing impaired due to an accident during a medical procedure. However, she showed her persistence and determination to excel in school graduating from Lincoln High School, Class of 1934. Furthermore, she went to live with family members in Philadelphia, enrolled in the Kingrow Beauty Culture School there, and became a licensed cosmetologist. Gussie had an endearing love for children in the community and referred to many of them as her "godchildren'. The children in the neighborhood knew that the lady on 12 Andrews Street, Mrs. Gussie's homestead, had a heart of gold which led her to give them candy and other "sweets". Needless to say, her home and beauty shop were often frequented by the children with a sweet tooth. Aside from spending most of her time as a cosmetologist, Mrs. Gussie spent hours and months knitting and crocheting beautiful spreads, blankets, and other items. These artful items were most often given to friends, family, and others in the community. She did not live a very solemn life, as she often played the family’s piano. At a very early age, she took piano lessons, and as a result, she could not only play sacred tunes, but she could also play songs to which the family could "cut a rug". As a matter of fact, even in the last few years, she, herself, would "cut a rug" at the Brian Center Nursing Home in Columbia. She had a passionate love for her grandchildren. Even in her sixties and beyond until her health began to fail, she was very active playing with them. Our friends often teased that her grandson Augustus was the first baby they knew in the seventies that at age one was given a television by his grandmother. She felt that Augustus "had to have a television". The grandchildren (Angela and Augustus) have fond memories of her "sneaking" them from her home to go across the street to "the Little Piggy Store" (Piggy Wiggly on Manning Avenue). The adults knew that when the house was extremely quiet, she and the grands had made another "unauthorized rendezvous" to Piggly Wiggly. When her son Louie was stationed in Vietnam, she constantly wrote him, kept him abreast of the stateside news, and encouraged him during his entire stay in the war. She spent her entire life, 106 years, with the exception of about six years, at 12 Andrews Street in Sumter, SC, the family's homestead, which still exists today. Subsequently, she spent two years at Randolph Manor in Sumter, SC, followed by four years at the Brian Center in Columbia, SC. Mrs. Holliday was on Stewardess Board Number Two at Mt. Pisgah A.M.E. Church in Sumter, SC, and participated as her health allowed. She was a very loyal member who INSISTED that her tithe be sent to her church. In addition to her parents, she was preceded in death by a foster mother, Mrs. Carrie Lawson, a daughter, Lucile H. Williams, her husband, Isadore Holliday and a son Ulysses Holliday. Those left to cherish her memory include: a son, Louie A. (Betty) Dicks, Sr., Columbia; three grandsons: L. Augustus (Robyn) Dicks, Jr., Greenville, SC; Richard (Deborah) Williams, Clarksville, TN., Keith (Sharon) Williams, Baltimore, MD.; three granddaughters: Angela (Brian) Godfrey, Greenville, SC, Ursula (Michael) Williams and Madyln Williams, both of Baltimore, MD; a special cousin, John C. Dicks, Baltimore, MD.; and a host of other relatives and dear friends.

Gustave Dicks Holliday, better known as "Mrs. Gussie", was born in. Sumter, SC on January 26, 1912. She was a daughter of the late Rosa Dicks Williams Ballard and the late Dave Williams. She was united in marriage to the late Isadore Holliday. At... View Obituary & Service Information

The family of Gustave Dicks Holliday created this Life Tributes page to make it easy to share your memories.

Send flowers to the Holliday family.