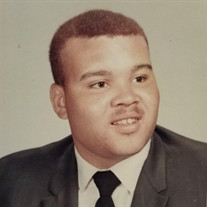 Harold Richard Boulware, Jr., transitioned from this world into eternity on March 6, 2019. He was born January 28, 1952 in Irmo, South Carolina to the late Harold Richard Boulware, Sr., and Margaret Richardson Boulware. He departed this life on March 6, 2019 at Lexington Medical Center. Harold was raised in a loving Christian home where he learned at an early age to always put God first and to love and respect others. He was baptized at an early age and joined Northminster United Presbyterian Church. He was a servant of God and had a compassionate heart, always helping people in any way possible. He was educated in the public schools of Richland County and was a graduate of Irmo High School, Class of 1970. Harold, affectionately called “Bugsy” was a “people person”, never meeting a stranger. He was jovial and loveable and was liked by everyone he met. His bright smile would light up a room and his sense of humor always put a smile on your face. He valued the gift of family, friendship and brotherhood. Bugsy was an avid sports fan and could quote sports stats at any given time. He loved the Minnesota Vikings but his heart was for the Atlanta Braves. Baseball was his game and early in life he played baseball for the Irmo baseball team. You would always find him on the pitcher’s mound throwing fast balls. The lighting speed of his pitches caught the attention of the Atlanta Braves. The scouts and recruiters were always around trying to entice Bugsy to become a valuable member of the Atlanta Braves baseball team. Harold was predeceased in death by his parents Harold Richard Boulware, Sr., and Margaret Richardson Boulware. Although Harold’s sweet physical presence is no longer with us, his memory will live forever in the hearts and minds of all who were fortunate to have known and loved him. He leaves to cherish precious memories, his daughter, Tameika LaShaun Boulware; two sisters: Harolyn Boulware and Barbara (Matthew ) Zimmerman; a brother, Marion Boyd, Sr.; a nephew, Patrick Chism; four nieces, Tina (Marlon) Smalls, Dana (Daniel) Bishop, Sharon Chism and Meridith (Adrian) Stokes; an aunt, Mary Richardson; and a host of other loving relatives and friends.

The family of Harold Richard Boulware, Jr created this Life Tributes page to make it easy to share your memories.

Harold Richard Boulware, Jr., transitioned from this world into...

Send flowers to the Boulware, family.