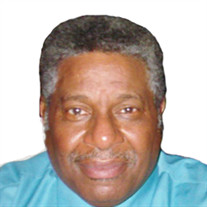 Harold was born to the late James Eugene and Virleen Hicks Myers in Hemingway, South Carolina. He was the eighth child of nine children. He was preceded in death by two sisters, Ethel Louise Myers Reaves, and Mary Lee Myers Wearing, and one brother, Ret. Sgt. Maj. James Myers, Jr. Harold graduated from Choppee High School in Georgetown, South Carolina, Class of 1966. Shortly after graduating, he moved to Bronx, New York where he later met the love of his life Brenda Jean Smith. After a short courtship, they married October 23, 1971. They lived in New York until 1977 and then they moved to Sumter, S.C, where the marriage was blessed with two children, Brandon Jerod and Aprile Nicole. His family was the center of his life. He was an exemplary example as a husband and father. At the time of his death, he was employed by South Carolina Department of Transportation as a Trades Specialist. Other previous employments included: Exide Battery and Turbeville Correctional Center as a S.C. Correctional Officer. Harold was a car and motor enthusiast both on and off the track. He had a love for NASCAR racing and watched it every chance he got. He enjoyed car shows as well. If there was anything that you needed to know about a “Chevy” then Harold Myers was “the Man”! Everyone knew and respected his vast knowledge about cars. He assisted countless people by helping them find parts for their cars and the right person to provide needed car repairs. His knowledge proved to be invaluable to many. Harold was a people person in that everywhere and anywhere he went he made friends. No one was a stranger to him. He made it his business to befriend everyone and truly get to know them on a personal basis. He was someone you could count on from that point forward. His memories will be cherished by his beloved and devoted wife, Brenda of the home; a son, Brandon (Bhumi) Myers and a daughter Aprile Myers; grandchildren: Kiaan, Bryce, and Chase; brothers: William (Susie) Myers of Central Islip, NY, Jeffrey (Sonya) Williamson of Nakina, NC and Marion (Ruthie) Hutchinson of Hemingway, SC; sisters: Blanche Myers, Bronx, NY and Shirley Mitchell New York City, Myrtle (Jimmie) Robinson of Cambria Heights, NY; and a host of nieces, nephews, cousins, in-laws and other relatives and many many dear friends.

Harold was born to the late James Eugene and Virleen Hicks Myers in Hemingway, South Carolina. He was the eighth child of nine children. He was preceded in death by two sisters, Ethel Louise Myers Reaves, and Mary Lee Myers Wearing, and... View Obituary & Service Information

The family of Harold Myers created this Life Tributes page to make it easy to share your memories.

Harold was born to the late James Eugene and Virleen Hicks Myers...

Send flowers to the Myers family.