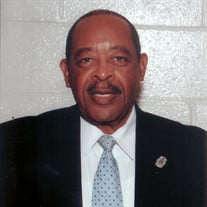 On Friday, February 15, 2019, the Lord reached down and called another soul, Harold Andrew White, to his eternal home. Born August 3, 1940, in Columbia, South Carolina, he was the sixth of seven children born to the late Thomas Andrew and Rosetta Edwards White. A proud graduate of C.A. Johnson High School in the Class of 1958, he loved to regale friends and family with stories of his childhood in Allen Benedict Court. After earning a Bachelor of Science degree in Physical Education from South Carolina State College (now South Carolina State University) in 1963, he was employed as an assistant coach and physical education teacher at Robert Smalls High School, Beaufort, South Carolina, before moving to Lakeview High School, West Columbia, South Carolina, where he was biology teacher, physical education teacher, head football coach, and basketball coach. He then returned to his alma mater as the assistant football coach and physical education teacher. His public school teaching career concluded at St. Andrew's Middle School in Columbia, South Carolina, after which he served a brief tenure as the Director of Student Activities at Benedict College. In 1971, he joined the Athletic Department at the University of South Carolina (USC), where he remained until his retirement in 2007. There he was a pioneer, integrating the Athletic Department and holding positions of assistant football coach, Academic Advisor for Athletics, Associate Athletic Director, and Senior Associate Athletic Director of Academics and Student Services. At USC, his top priority was to ensure that athletes had every opportunity to earn a degree. Harold always placed academics ahead of athletics when advising student athletes. He was the first Compliance Officer for the Athletics Department at USC. Over the years Harold received numerous awards and recognitions. Among those were: Omega Man of the Year for Omega Psi Phi Fraternity, Omicron Phi Chapter; the prestigious Lan Hewlette Award of the National Association of Academic Advisors in recognition of his sustained professional service in academic advising for student athletes, high level of competency in administrative skills, merited stature and support from the athletes, faculty, coaches and fellow administrators as well as his innovative response to the varied and emergent needs of the athletes, and his leadership in university affairs; Distinguished Service Award from the National Association of Academic Advisors for Athletics; the Whitney M. Young, Jr. Award by the Columbia Urban League in recognition of his commitment and leadership in leveling the academic playing field for athletes at USC; induction in the Columbia, South Carolina Housing Authority Hall of Fame; the Order of the Palmetto, the highest honor given by the State of South Carolina; and induction into the University of South Carolina Athletics Hall of Fame. In addition to all of his works with student athletes, Harold served his community as well. He was a member of the National Football Foundation and Hall of Fame; Chairperson of the Heyward Career Center Foundation Board; member of Omega Psi Phi Fraternity Omicron Phi Chapter; and NAACP member. Harold began his relationship with God at Bethlehem Baptist Church before joining Northminster Presbyterian Church where he served in many capacities including Elder. He later joined Brookland Baptist Church. After retirement, Harold enjoyed church activities, attending sports activities, organizing summer sports activities at the University of South Carolina for Columbia Parks and Recreation campers, and being involved in the life of his four grandchildren. He lived by the motto, "You do things in spite of, not because of." In addition to his parents, he was preceded in death by four brothers: Thomas O. White, Frank W. White, James E. White, and Hugh A. White. He leaves to cherish precious memories his devoted wife, Lilly Mozella Hodges White; two daughters: Tami White Richardson and Thyra White Austin; four grandchildren: Andrew Richardson, Amber Austin, Aaron Austin, and Alan Austin; a sister, Margaret Palmer; twin brother, Donald (Marcia) White; and other relatives and friends.

On Friday, February 15, 2019, the Lord reached down and called another soul, Harold Andrew White, to his eternal home. Born August 3, 1940, in Columbia, South Carolina, he was the sixth of seven children born to the late Thomas Andrew and Rosetta... View Obituary & Service Information

The family of Harold Andrew White created this Life Tributes page to make it easy to share your memories.

Send flowers to the White family.