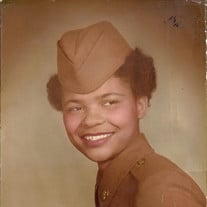 On Tuesday, May 9, 2017, Hattie Session answered the call of our Heavenly Father at her home in Sumter, South Carolina. Ms. Hattie Session was born in Sumter, South Carolina on May 9, 1935 to the late Willie and Conelia Ross Session. She was the grand-daughter of the late Richard Ross and Mary Colclough Ross. She received her education in the Sumter County School District at Lincoln High School. After high school, she joined the United States Army. During her military tenure, she received several awards to include: the National Defense Service Medal with Oak Leaf Cluster, the Good Conduct Medal, Army Commendation Medal, with Oak Leaf Cluster and the Meritorious Service Medal. Hattie served in the military for 20 years and retired as Master Sergeant. After retirement, she was employed by RTA Transit for numerous years where she also retired as a civilian. At an early age, she joined Cedar Grove Missionary Baptist Church in Sumter, South Carolina. In later years, she became a faithful member of Mt. Pisgah AME Church in Sumter where she served as an active member of the church in many capacities. Hattie had many hobbies. She loved baseball and frequently traveled to Atlanta to attend the games of her beloved Atlanta Braves. She also enjoyed camping, swimming, golfing, and tennis. She was also always ready for a good old political debate on behalf of her political party. In addition to her parents and grandparents, she was preceded in death by, four brothers, Rufuess, Willie, Joseph “Joe”, and James Session; two sisters, Mary Session and Conelia Harvey and one brother in law, Leon Harvey. Her loving and fond memories will be cherished by her daughter, Pamela Renee (Canty) Robinson, Sumter, SC; a stepdaughter, Magdalene Mae Carter of the home; three grandchildren, Christopher Lamar Robinson,Jasmine Lashay Robinson, Sumter, SC and Carlos Jerrod Robinson of the home; two sisters-in-law, Louise Session and Leola Session, Sumter, SC; and a host of nieces, nephews, and a host other relatives and caring friends.

The family of Hattie Session created this Life Tributes page to make it easy to share your memories.

Send flowers to the Session family.