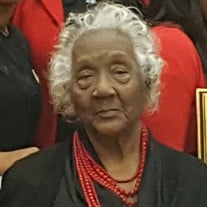 On Wednesday morning, December 18, 2019, God called home a humble servant and true woman of God, Hazel Elizabeth Johnson Harkness. It is without a doubt, she heard the voice of the Lord say, "Well done my good and faithful servant daughter;... View Obituary & Service Information

The family of Hazel Johnson created this Life Tributes page to make it easy to share your memories.

Send flowers to the Harkness family.