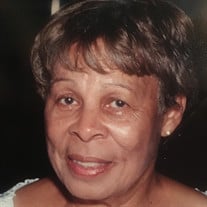 Helen Joyner Bibby was called from her earthly labor to her heavenly reward on Saturday, August 18, 2018. Helen Joyner Bibby was born July 23, 1934, in Columbia, South Carolina, as the third born of nine children to the late Ernest Henry Joyner and Hattie Woodson Joyner Cagle. Helen attended Waverly Elementary School and Booker T. Washington High School in Columbia, but graduated from Mather Academy in Camden, South Carolina. As a teenager, Helen's closest friends were her sister, Dorothy, and her neighboring buddies: Eugenia Johnson and Louise Rice. They managed to find lots of excitement together in their growing up experiences. All three: Helen, Louise, and Eugenia grew up to become outstanding educators. Helen met and married the love of her life, John W. Bibby, and earned a Bachelor of Arts degree in Elementary Education from Benedict College. John and Helen moved to Berryville, Virginia, for her first teaching assignment. They later settled in Cincinnati, Ohio, and became the proud parents of their beloved son, John Daryl. Helen's teaching career blossomed with the Cincinnati Public School System, where she taught third grade for many years. Sadly John passed away in 1988. Helen's circle of close friends in Ohio included: her very dear friend, Zenobia Mitchell; her sister-in-law, Sylvia Stroman Joyner; and a few special colleagues, neighbors, and friends at church. Helen accepted Christ at an early age and grew up in Bethlehem Baptist Church in Columbia. She later joined First Baptist Church of West College Hill, where she remained an active member until she left Ohio to care for her mother. When Helen's mother's health declined, Helen took an early retirement from the Cincinnati Public School System in order to return to Columbia and give special assistance and closer attention to her mother. She purchased a home in Irmo and continued as a teacher, taking substitute assignments with the Columbia Public School System after her mother passed. She also took particular interest in her special needs brother Harry, taking him almost every Saturday for barber shop appointments and other special treats. She also extended her loving care to her nephew Wellington Bookert as he completed part of his college education while living in with her. When Helen returned to Ohio September 18, 2010, she returned as a resident in an assisted living complex and later transferred to the Mallard Cove Assisted Living Complex where she resided until her death. In addition to her parents and beloved husband, Helen was preceded in death by a sister, Sherry Bookert; and two brothers: Major Ernest Joyner and Frank Joyner. Helen's loving memory will be cherished by her devoted son John (Therese) Bibby of Cincinnati; two grandchildren: Shane Bibby and Brittany Bibby of Cincinnati; five siblings: Betty Vereen of Phoenix, Arizona, Dorothy (Bennie) Bracken, Harry Joyner, all of Columbia, Arthur (Michelle) Joyner of Cincinnati, and James (Carol) Joyner of Concord, North Carolina; a sister-in-law, Queen Joyner, of Columbia; and a host of other relatives and friends. Helen will long be remembered for her generous nature and loving concern for others.

The family of Helen Joyner Bibby created this Life Tributes page to make it easy to share your memories.

Helen Joyner Bibby was called from her earthly labor to her heavenly...

Send flowers to the Bibby family.