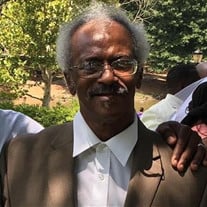 Henry Franklin Glover Jr, affectionately known as “Glover” was born September 11, 1946, in the Pineville community of Bowman, South Carolina. He was the first born child of the late Henry Franklin Sr. and Essie Miller Glover. On Monday evening, April 17, 2017, Henry heard the Master’s call and kindly answered and went home to be with the Lord. Henry’s early education began at East Middle School (one of the Rosenwald Schools in Bowman) where his mother taught. Upon its closing, he attended Bethune Memorial (Elementary/High School) and graduated as Valedictorian of the Class of 1964. He continued his education at South Carolina State College, now South Carolina State University, and graduated in 1968 with a Bachelor of Science degree in Agricultural Sciences. At SC State, Glover was a member of the NAACP and was initiated into the Beta Alpha chapter of Alpha Phi Alpha Fraternity, Inc. Henry was a drummer! He enjoyed performing with his disc jockey friends and gladly played at many festive events. Glover grew up attending Pineville UME and Andrew Chapel Baptist Church in Bowman where he served faithfully as a member of the Sunday school, Youth Choir, and Men’s Choir. Upon moving to Columbia, Henry frequently attended Haskell Heights Baptist Church. In the late 1970s, he met the love of his life, and on August 15, 1987, they were married in Beaufort, South Carolina. To this loving union, a daughter, Kayla, was born. Glover was the owner and operator of Associated Contractors, working diligently to provide for his family. Well known and loved by all he met, Henry never met a stranger treating all that he met with respect and kindness. He touched the lives of many and will forever be remembered and fondly cherished by his family and many friends made throughout his lifetime. Henry leaves to cherish precious memories his wife, Vera Pinckney-Glover of the home; two sons: Marc Glover of Bowman, and Eric (Lora) Glover of Elgin, South Carolina; two daughters: Kelly Shannell Pinckney of Columbia, and Kayla (Robert) Cannon of Spartanburg, South Carolina; six grandchildren: Jasmine Glover, Erica Glover, Emily Glover, Aniyah Daniels, Ayden Cooke, and Tabitha Jackson; one sister, Mazie Glover Lewis of Columbia; four sisters-in-law: Virginia Washington, Verneda (James) Murray, Mamie (Stephney) Simmons, and Hazel Deberry, all of Beaufort, South Carolina; one brother-in-law, John Nixon of Brooklyn, New York; three aunts: Fannie M. Way, Gladys Moss, Aleane Moss; one uncle, Deacon Marion Cain; four aunts-in-law: Alice Nixon, Theresa Reed, Lucille Gregory, and Hanunah Abdullah; one uncle-in-law, George Wright; and a host of nieces, nephews, cousins, and many, many friends who will dearly miss his presence in their lives.

The family of Henry Franklin Glover Jr created this Life Tributes page to make it easy to share your memories.

Send flowers to the Glover family.