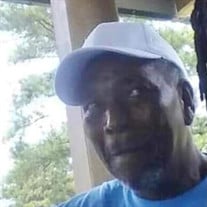 Henry "Bo Cat" Waiters, Jr., husband of Nellie Waiters, exchanged life for his heavenly home, on Monday, February 8, 2021 at his residence. He was born March 25, 1949 in Horatio, SC to the late Henry Waiters, Sr. and Margie Pringle Waiters. He received his formal education in the public schools of Sumter County. Henry was a hardworking man and was employed in construction for many years. He also had a passion for tinkering with cars. He met and married the former Nellie Williams and they have shared 49 years of love and devotion to each other. In addition to his parents, Henry was preceded in death by his daughter, Victoria L. Waiters; son, David L. Johnson; granddaughter, Shalanda R. Rhodes; and sister, Patricia W. Phelps. Those left to cherish his memories: his wife Nellie Waiters of the home; two daughters, Katherine (Shavon) Waiters of Sumter, SC and Betty (Joseph) Dennis of Columbia, SC; one son, Donte T. Mathis of Sumter, SC; two special sons, Demetrius Jackson and Tremeterius Jackson both of Horatio, SC; ten grandchildren; twenty great grandchildren; two brothers, James (Carolyn) Waiters of Anderson, SC and Lewis (Frances) Waiters of Horatio, SC; three sisters-in-law; two brothers-in-law; a host of nieces, nephews, other relatives and friends. To access the livestream of the service, please go to Facebook.com, search for Palmer Memorial Chapel, Inc. and like the page. The livestream video will begin at 1:00PM on the day of the service.

The family of Henry Waiters created this Life Tributes page to make it easy to share your memories.

Send flowers to the Waiters family.