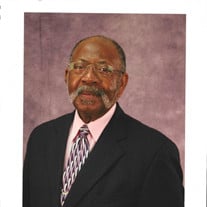 Mr. Herbert Walter James, husband of the Late Carrie Lang James departed this earthly life on Friday, June 18, 2021 at National Health Care, Sumter, SC. He was the youngest of seven children, born to the late Mr. Wesley and Mrs. Victoria Pinckney James Coleman on April 9, 1936 in Sumter County, South Carolina. He received his formal education in the public schools of Sumter County. He graduated from St. Michael High School in the Class of 1954. His work ethic began at a very early age. During his youth, he was a School Bus driver for Sumter School District No. 2 and worked part-time at Shaw AFB Golf course. During his leisure time, he enjoyed fishing and playing basketball with neighborhood friends. Mr. James began his career as a dedicated Purchasing Agent at Shaw AFB Officer’s Club. He traveled nationwide to numerous Club Leadership Development conferences to enhance his performance in Advanced Club Management. He retired after forty-two years of successful service. He continued in the workforce for seven years at FJ DeLaine Elementary School until his second retirement. At an early age, Mr. James accepted Christ and became a lifelong member of Wayman Chapel A.M.E. Church where he served faithfully in many capacities including: President of Senior Usher Board for many years, a member of the Benevolence Club, Trustee Board, Steward Board Emeritus, Choralairs Choir, Men’s Chorus, Son’s of Allen and on the Finance Committee. Mr. James was active in the Wedgefield community where served as a Boy Scout Leader and mentored youth. He was a Founding Member and President of Dreamland Social Club. Mr. James was a lifetime member of Catchall Masonic Lodge #425 thus recipient of the Pin and Jacket for over forty-two years of service. Mr. James savvy entrepreneurial skills, helped to supplement the family throughout the years. He moonlighted as a Bartender/Mixologist for the Officer’s club and private parties throughout Sumter and surrounding counties. He also ventured into a catering business with his wife, Carrie. Mr. James was humble, friendly, fun-loving with sometimes a mischievous sense of humor. He had a passion for cars, horseshoes, and dancing to Electric Slide. He was known as the ultimate Grill Master at family cookouts! He adored spending time with his family from summer vacations to Florida, New Jersey and New York to playing several rounds of cards especially, psyching out his opponents when playing Bid Whist. His loyalty and devotion for community was just as strong. Often he would help neighbors with chores, rounding up livestock, building fences, sheds or whatever was needed. You could always count on Mr. James to lend a helping hand. Mr. James was joined in holy matrimony to the late Carrie Lang James in 1956. This union was blessed with two loving children, Ruben and Pamela. He was a devoted husband, father as well as a brother, uncle and cousin – he truly loved his family. In addition to his parents and wife, he was preceded in death by his son Ruben; two brothers, Robert James Sr. and Marion James Sr.; four sisters, Ella Mae J. Walker, Victoria J. Taylor, Earline J. Prioleau, and Lessie Mae James. He leaves to cherish fond memories, his loving and devoted daughter, Pamela (Tracy) Brooks of Bristow, VA; a granddaughter, Jamie L. “Chiymyra” Howard of Ashburn, VA; a grandson, Myles D. Brooks of Bristow, VA; faithfully devoted caregivers, nephew and niece, Willie and Evelena Prioleau; sisters-in-law, Elease L. James, Mary L. Gardner, Frances L. Campbell of Wedgefield, SC and Nellie L. Jones of Jonesboro, GA; two brothers-in-law, Warren Lang of Rahway, NJ and Freddie (Margaret) Lang of Wedgefield, SC; a goddaughter Sharde’ Brace. To access the livestream of the service, please go to Facebook.com, search for Palmer Memorial Chapel Inc., and "like" the page. The livestream video will begin at the designated time of the service.

The family of Herbert Walter James created this Life Tributes page to make it easy to share your memories.

Send flowers to the James family.