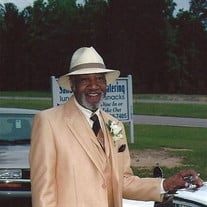 Life Reflections Herbert Sanders entered into eternal rest on Wednesday, December19, 2018 at WJ Dorn VA Medical System in Columbia, SC. Born on May 19, 1933 in Rembert, SC, he was a son of the late Hayes Sanders and Mettie Dais Sanders. Herbert attended the public schools of Sumter County and graduated from Lincoln High School in the Class of 1952. After high school, he entered the United States Army during the Korean Conflict and served for two years. At the end of his military tour of duty, he moved to New York where he met the love of his life Lucille Owens. She was the woman of his dreams. Lucille was very sociable and helped him to come out of his shyness. He loved her and was always at her side in support of any event she spearheaded. Together they shared many wonderful and exciting years. While there, he was employed at the Northport Veteran’s Hospital as an E. R. Assistant. Herbert was noted as a diligent worker and was recruited by the New York City Transit Authority as a conductor driving the Subway Trains. He was one of only three people, who were chosen to modernize the efficiency of New York City Transit Authority by Mayor Koch. After several years there, he was affectionately known to his co-workers and friends as “´Big Hat”. Herbert was promoted with a position in management as the Night Superintendent of the Subway Lines, where he remained and retired after 37 or more years. After moving to South Carolina, he attended Mt. Pisgah Missionary Baptist in Rembert, South Carolina. He and Lucille were the former owners of the” Sanders Café Caterers “N” Rembert, South Carolina and finally the Shantel’s B&B Inn, in Sumter. In spite of their busy schedules, they continued going back to New York every year to celebrate birthday parties, re-unions and cook-outs with family and friends. He also enjoyed farming, traveling, cruising and just seeing and experiencing the good life. The last visit to New York was in 2015, after he became challenged in his health. Herbert lived a full and wonderful life and will be remembered for his generosity, calm demeanor and will be sincerely missed by all his family and friends. In addition to his parents, he was preceded in death by a loving stepson, Christopher D. Thompson. He Leaves to cherish precious memories, his loving wife of thirty-eight years, Lucille Owens-Sanders, one daughter, Leslie Curry of Baldwin New York, two sons, Gerard Sanders of Los Angeles, California and Mark Sanders of Bronx, New York; seven grandchildren: Cortney Curry, Jordan Curry, Christian Sanders, Arriana Sanders, Malaysia Sanders, Shantel Thompson, and Veronica (Christopher) Rush; one great-grandson , Jayce Edward Spriggs, two sisters , Alma Sanders Roman, Pomona, New York and Dr. Virginia and her husband Julian Brown, Sumter ; a sister-In-law , Johnnie Womack, Fairmont, West Virginia; nieces and nephews; best friends, Sam (Irene) Stanton, and Harrison “Buck” Grant and a host of other relatives and dear friends .

Life Reflections Herbert Sanders entered into eternal rest on Wednesday, December19, 2018 at WJ Dorn VA Medical System in Columbia, SC. Born on May 19, 1933 in Rembert, SC, he was a son of the late Hayes Sanders... View Obituary & Service Information

The family of Herbert Sanders created this Life Tributes page to make it easy to share your memories.