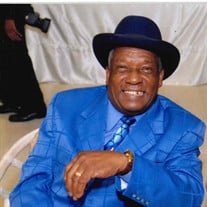 Hiawartha Lee was born to Viola Lee Mitchell on June 25, 1929, in Monroeville, Alabama. Hiawartha transitioned on February 4, 2022, at Deepwood Estates in Lexington, S.C. Early Years: Hiawartha affectionately, known as Pop to his children, was reared in Alabama by his late grandparents, Benjamin and Adella Mosely Lee. It was an extended family household with aunts, uncles, and cousins. Education: Hiawartha received his education from Monroeville’s public school system. At the age of sixteen, Hiawartha moved to Pensacola, Florida for, better opportunities. Early Career: It was in Pensacola, Florida where he began his career as a mechanic working for Mitchell Motor Co., 1947-1951. Thereafter, he enlisted in the Army from 1951-1953. He served in the Korean War, and during this time, he also toured in Germany where he earned an Occupation Medal. After the service, he migrated to Brooklyn, NY. Husband and Father: It was 1953 in New York, where Hiawartha met and married Virgie Valentine. The union produced two children, Deberah and Melvin. After several years of marriage, they decided to part ways. It was in 1961 when Hiawartha met Brenda F. Wall. Brenda had a young daughter, Kay, who Hiawartha loved as his child. Hiawartha and Brenda had two children, Allen Jeffery and Yvette. The relationship between Hiawartha and Brenda severed. In 1970, he met and married Mary Lucas; their son Jamil Hiawartha Lee was born in 1972. Continued Career Path: Pop continued his mechanical career in Port Jefferson, NY. He worked with Chrysler Plymouth for 20 years. Around 1979, Pop relocated to South Carolina. He worked for CNS Toyota from 1979-1987. In 1987, he opened Lee’s Auto Shop in Orangeburg, S.C. Pop retired in the early 1990’s. Pop enjoyed his retirement years. He enjoyed traveling; love to eat out; the rib-eye steak was his favorite. His favorite drinks were Crown Royal and Hennessy. Another one of his great past times was watching Monday Night Wrestling. He was full of life until his demise; love to have a good time; the life of the party; just an all-around great spirit. He leaves to cherish his memory, children: Deberah Chavis from Virginia; Melvin Lee, Allen J. Wall, Yvette Wall and Kay Wall from Queens, NY and Jamil H. Lee in S.C.; special cousins Dorothy Dale and Willie Forde; 8 grand-chilidren: Jamil H. Lee II; Jalen Mobley-Lee; Morgan A. Lee; Shirley Kittrell; Asia Wall; Sherita Wall; Adalis Frieson and Allen J. Wall II; 8 great-grandchildren; a host of nieces; nephews; cousins; and of course his many friends; he truly treasure you! To view services via zoom please see the link below: https://us02web.zoom.us/j/84537927062?pwd=bnVEcnFpQXcrTjhPVU1DRVA5V3k1UT09

The family of Mr. Hiawartha Lee created this Life Tributes page to make it easy to share your memories.

Send flowers to the Lee family.