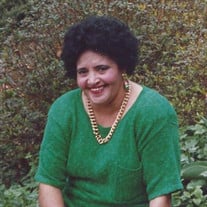 Hilda Faye Addison Garrison, affectionately known as “Big Sister” was born August 16, 1940 in Blythewood, S.C. to the late James and Annie Bell Lorick Addison. On Saturday, January 16, 2016 she ended her earthly walk to be with her Heavenly Father. Hilda received Christ as her personal Lord and Savior at a young age at Bethel Baptist Church. She was educated in the public schools of Richland County. After her first marriage in 1964 she relocated to Greenville, S.C. and resided there for over 50 years. Hilda enjoyed spending time with her family and friends, shopping, collecting antiques and most of all her unlimited collection of watermelon. She had an infectious laugh that was one of a kind. She worked as a self-employed home maker for over 30 years until her untimely death. She is preceded in death by her twin sister Minnie Rish; sisters Dorothy Addison, Lizzie Wright, Mary Ellen Morris, Margaret Samuels; brothers George, Richard and James Addison. Hilda’s memories will be fondly cherished by her son, Vernon (Vanett) Addison, Sr. of Columbia, South Carolina; Grandchildren, Samantha Goodwin, Vernon (Briana) Addison, Jr. of Tacoma Washington, Antwan (Savannah) Addison of Columbia, S.C. and Deydreion, Unique, Destiny, and Dey’lajure Addison, of Rock Hill, S.C. Sisters, Bessie (John Abbott) Summers of Columbia, S.C., Josephine (the late Henry Lee)Tucker of Ridgeway, S.C., Polly (Ellis) Belton and Gladys Addison, both of Columbia, S.C. ; a special niece, Mickeiu (Marlon) Addison of Spartanburg, S.C. and a special friend, Ulysses Garrison of Greenville, S.C. and a host of nieces, nephews and other relatives and friends, all of whom will miss Hilda dearly.

Hilda Faye Addison Garrison, affectionately known as &#8220;Big Sister&#8221; was born August 16, 1940 in Blythewood, S.C. to the late James and Annie Bell Lorick Addison. On Saturday, January 16, 2016 she ended her earthly walk to be with... View Obituary & Service Information

The family of Hilda Faye Addison Garrison created this Life Tributes page to make it easy to share your memories.

Send flowers to the Garrison family.