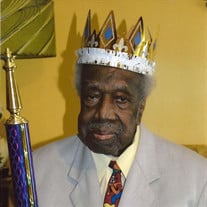 “If I can help somebody, then my living will not be in vain” Mr. Huroy Howard Brown, Sr. departed this earthly life on Thursday, September 15, 2016, at his residence in Sumter, South Carolina. Born February 3, 1916 in York, South Carolina, he was the sixth of nine children born to the late Samuel Brown and Mary Jane Pickenpack Brown. Mr. Brown was educated in York County public schools. He was a graduate of Jefferson High School in the Class of 1938. He attended Vorhees College and was a graduate of South Carolina State Agricultural College where he majored in Industrial Arts. While he attended State College, Orangeburg, S. C., he was drafted into the military service and served his country in the United States Marine Corps, (From 1943-1945 World War II.) He returned to State College after military service and graduated in the Class of 1946. After college, he was first employed as a teacher at Robert Smalls High School in Beaufort, South Carolina and later taught in the St. George Public School System. He began work on his Master’s Degree at State College and completed in 1955. After a few other teaching assignments, he moved to Lincoln Institute in Lincoln Ridge, Simpsonville Kentucky where he remained for twenty (20) years. After integration, the Lincoln Institute closed, and he returned to South Carolina where he resided in Sumter while teaching in Bishopville, S.C, he taught in the South Carolina Public Schools for over twenty years. He was a lifelong educator until his retirement in 1976 (at the age of 62). After returning to the Sumter Community, he joined Mt. Pisgah A.M.E. church where he was a Trustee for a number of years. He was chosen “Man of the Year” in 2015 and in 2016 “Mr. Mt. Pisgah.” In his spare time, he enjoyed carpentry and construction work. While attending South Carolina State College as an undergraduate in 1942, his senior hostess- at the freshman table was Ms. Everette Roberts. He became a dancing partner and they enjoyed movies together. While stationed in the South Pacific, he proposed marriage by letter. On Christmas Day five days later, they married on December 30, 1945 and their marriage has endured for seventy years. From this loving union, four children were born: Huroy, Jr. (1946), Alonso, (Hakeem Sabur)-(1948), Samuel (1954) and Evetta (1960). Their relationship was filled with both domestic and international travel (favorites were Hawaii and Alaska). He was patient, a snappy dresser, tall, handsome and a gentleman. In addition to his parents, he was preceded in death by his daughter, Evetta Brown Vaughn (2012) and his siblings, brothers: Walter, Roosevelt and Warner Brown; sisters: Flora Brown Gordon, Letha Brown Summer, Lucie Reid Brown, Jessie Brown Knighton and Alma Gee Brown Curry. He leaves to cherish precious memories, his beloved wife of seventy years, Everette Roberts Brown of the home; three sons, Huroy H. Brown, Jr. of Sumter, Alonso (Hakeem O. (Shakula Sabur) of Washington, D. C. and Samuel F. T. (Joyce) Brown of Florence, S.C.; 13 grandchildren; 20 great-grands, nieces, nephew and a host of other relatives.

The family of Huroy Howard Brown Sr. created this Life Tributes page to make it easy to share your memories.

“If I can help somebody, then my living will not be in vain”
Mr....