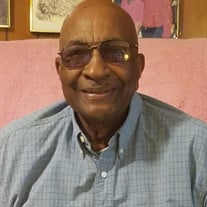 In the early morning hours of Sunday, October 4, 2020, the Lord sent angels down to call another warrior home to rest. JC Black quietly took his last breathe at Prisma Health Baptist in Columbia, South Carolina. Born April 7, 1936, in Bishopville, South Carolina, he was one of eleven children born to the late Mack Zella Black, Sr. and Annie Mae Wilson Black. After relocating to Columbia in his early adulthood, he met and married the love of his life, the former Josephine Richardson. Their loving union was bless with three children: Ronald, Angela, and Chandra; and continued for fifty-six years until God called his child Josephine to glory in 2016. A carpenter by trade, JC enjoyed hard work and keeping his yard mowed and edged. Another integral part of his weekly routine was his time at Greenview First Baptist Church, which he considered as part of his family. He considered family to be the greatest of treasures, delighting in his children and grandchildren, who were his pride and joy. Despite not having much formal education himself, he stressed the importance of education to his family. This focus along with faith in God, being honest, of unimpeachable character and directness almost to the point of being blunt were the hallmarks of his personality. In addition to his parents and beloved wife, he was preceded in death by his son Ronald and three siblings: Leroy Black, Coel Black, and Mack Black, Jr. He leaves to cherish precious memories his devoted children: Angela (Alvin) Josey and Chandra Black, all of Columbia; four grandchildren: Joron Black, Justin Black, Ka’Shon Josey, and Dominique Black; seven siblings: Willie (Barbara) Black, Annie Mae Capers, Curlee (Lou) Black, Andrew (Essie) Black, Carrie Grey, Mary Lee Black and Maxine Black Stuckey; a host of nieces, nephews, other relatives and friends who will miss him dearly.

The family of J C Black created this Life Tributes page to make it easy to share your memories.