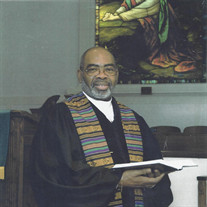 And they shall turn their ears from truth and shall be turned unto fables. But watch thou in all things, endure afflictions, do the work of an Evangelist, make full proof of thy ministry. For I am now ready to be offered, and the time of my departure is at hand. I have fought a good fight, I have finished the course, I have kept the faith. Henceforth is there laid up for me a crown of righteousness, which the Lord the righteous Judge shall give me at that day, and not to me only, but to all them that also love His appearing. There is a time and appointed place where each life reaches its zenith and after comes the setting of the sun. On Saturday, September 28, 2019, Rev. Jack, as he was known to many, was called from labor to reward. Rev. Jack, as he was affectionately called, was the eighth of eleven children born to the late Hezekiah and Susan Nelson Washington. He is a 1964 graduate of Russellville High School in St. Stephen, South Carolina. His early spiritual formation to Christianity and and answer to God's call to the ordained ministry began at Bethel United Methodist Cchurch, Forty-one Section, St. Stephen, South Carolina. Rev. Jack was a 1977 graduate of Claflin University with a Bachelor of Arts degree in Religion and Philosohpy, and was a 1980 graduate of Gammon Theological Seminary-ITC with a Master of Divinity degree. He was a member of the Free Mason, St. John Lodge #349 in Pineville, South Carolina. He was also a member of Alpha Phi Alpha Fraternity, Incorporated, Delta Alpha Chapter. Rev. Jack held positions on all levels of the United Methodist Connection, Annual Conference, Jurisdictional, and the General Church. He pastored churches throughout South Carolina: in Charleston, St. Jude; Murrells Inlet, St. James; Eadytown, Mt. Nebo; St. Stephen, St. Stephen Parish; Easley, Easley Charge; Orangeburg, Edisto Fork Parish; Columbia, Conference Council on Ministries; Kingstree, Mt. Zion; Columbia, I. DeQuincey Newman; Summerville, Canaan; Ridgeville, Sandhill Charge; before returning to I. DeQuincey Newman. On December 22, 1968, he entered into holy matrimony with the former Johanna Anderson of Cross, South Carolina. Those left to cherish his dignified, unselfish, and charitable life are his loving spouse, Johanna A. Washington, of the home; three sons: Jack Leonard Washington of Atlanta, Georgia, Andrew Neilson (Trenia) Washington of Blythewood, South Carolina, and Kevin Lee Washington, also of Atlanta; two daughters: Gwendolyn (Kenneth) Maybank of St. Stephen and Johanna Denise (James) Bridgett of Columbia; ten grandchildren: Kenneth Christopher Maybank, Nathaniel Alexander Washington, Jayme Marie Tilman-Bridgett, Mya Washington, Makayla Washington, William Maybank, Joshua Chase Washington, Jayda Symone Bridgett, Devon Washington, and Matthew Christian Washington; two brothers: James Rollison Washington of Miami, Florida, and John J. (Rose) Washington of Jersey City, New Jersey; four sisters: Geneva Reed of Emporia, Virginia, Rosa Lee Washington of Jersey City, Rebecca W. Eleazer of Columbia, and Elizabeth W. (Elwood) Tyson of Midlothia, Texas; and countless other relatives and friends.

And they shall turn their ears from truth and shall be turned unto fables. But watch thou in all things, endure afflictions, do the work of an Evangelist, make full proof of thy ministry. For I am now ready to be offered, and the time of my... View Obituary & Service Information

The family of Rev. Jack Christopher Washington created this Life Tributes page to make it easy to share your memories.

And they shall turn their ears from truth and shall be turned...