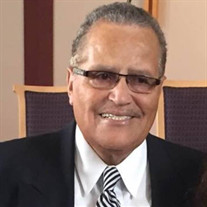 James Ralph Davis departed this earthly life for his heavenly home on Sunday, August 5, 2018. A native of Palmer Spring, Virginia, he was born November 26, 1932, as the third of seven children to the late William and Josephine Coleman Davis. He was educated in the public schools of Mecklenberg County, Virginia, and was a graduate from East End High School. Upon graduation, he entered Morgan State College (now Morgan State University) in Baltimore, Maryland. A proud and duty-bound American, he interrupted his education and enlisted into the United States Air Force. Assigned to the 363rd Squadron at Shaw Air Force Base in Sumter, South Carolina, James served as a fighter jet Aircraft Technician and engineer. After four years of service in the Air Force, he received an honorable discharge and moved to New York where he was employed with TWA Airlines and Ramp Service at LaGuardia Airport. After a short period, he returned to South Carolina and entered Morris College where he earned a B.S. Degree in Biology and later accepted an Athletic Director and teaching position at Dennis High School in Bishopville, South Carolina. After leaving Dennis High School, he then accepted a position as an Insurance Consultant and was sent to Chicago for further studies and certification at Dale Carnegie School of Positive Thinking. Following that study, he then worked for Metropolitan Life Insurance Company as a Sales Consultant. He became a three-time Millionaire Producer and Member of the Round Table. He completed additional studies at the University of South Carolina where he received his Certification for CLU. After ten years with Metropolitan Life Insurance, James joined the South Carolina State Budget and Control Board. Serving as an Assistant Director, he was then promoted to Director of Customer Relations for the South Carolina Employees Insurance Program. While still serving in this capacity he was appointed by the former Governor Carroll Campbell to serve in a dual capacity as Consultant and Commissioner for Richland County Recreation Commission. After six months he was unanimously elected Chair. He retired from the state government in the year 2000, after thirty-nine years of service. During his subsequent retirement, he served as Chairman Emeritus of the Richland County Recreation Board of Commissioners. Learning to love the Lord at an early age, James joined Roanoke Baptist Church, and many years later joined First Cavalry Baptist Church in Columbia, South Carolina, where he worshipped with this beloved wife and family. In addition to his parents, James was preceded in death by two sisters: Isabelle Garnis Davis and Lillie Alexander; and a brother, William Davis, Jr. He leaves to cherish his memories his loving wife, Dr. Vivian S. Davis of the home; three daughters: Jamella Williams of Columbia, Tara Davis of Atlanta, Georgia, and Sharon Hanks of Columbia; two sons: Allen Kearney of Greensboro, North Carolina, and Alton Davis of Columbia; five grandchildren: Kia Williams, Kiana (Vince) Sneed, Ian Kearney, Janais Davis, and Cristofher Griffin; two great grandchildren: Mauri Williams and Jaylen Johnson; three sisters: Augusta Faines of Bronx, New York, Sarah (Douglas) Hanks of Philadelphia, Pennsylvania, and Alice (Henry) Walters of Richmond, Virginia; a sister-in-law, Lalla Davis of Charlotte, North Carolina; and a host of nieces, nephews, cousins, and friends.

James Ralph Davis departed this earthly life for his heavenly home on Sunday, August 5, 2018. A native of Palmer Spring, Virginia, he was born November 26, 1932, as the third of seven children to the late William and Josephine Coleman Davis.... View Obituary & Service Information

The family of James Ralph Davis created this Life Tributes page to make it easy to share your memories.

James Ralph Davis departed this earthly life for his heavenly...