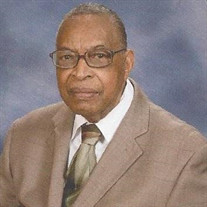 Rev. James Solomon Gadsden, Sr., affectionately known as Jim to many, was called home to his heavenly reward Monday, June 19, 2017, in Columbia. Jim, the ninth child born June 12, 1930, to the late William and Rosa Rollerson Gadsden, was a graduate of the Boylan-Haven Mather Academy Class of 1950 in Camden, SC. Jim earned an A.B. degree from Claflin College (now University) in Orangeburg, SC; a Master of Divinity from Gammon Theological Seminary in Atlanta, GA; and a Doctor of Divinity from Interdenominational Theological Center of Atlanta. A bright scholar and leader at a young age, Jim was in the top ten of his class at Mather Academy. While at Claflin, he was president of his class for four years, and graduated summa cum laude in History and Religious Studies. At Gammon, he was third in his graduating class, received the Smith-Taylor Award for writing and academic growth, and was a member of the National Honor Society of Alpha Kappa Mu. Jim was licensed to preach in 1948 in the Berkeley District on the recommendation of Bethel Church in St. Stephen, SC. He was admitted on trial in 1951, ordained deacon in 1953, ordained elder in 1957, and received into full connection in 1957. A ministerial member of the South Carolina Annual Conference, Jim served numerous appointments including: Associate Editor of Youth Publications at the Board of Discipleship and United Methodist Publishing House in Nashville, TN (1967-1978); Greenwood District Superintendent in Greenwood, SC (1978-1984); and the Conference Council Director of the SC Annual Conference (1985-1989). As a pastor, he served in the following appointments: Walterboro (1952); Summerville (1953); West Anderson Charge (1954-1957); Lamar (1957-2958); Sumter (1959); Camden (1960-1966); Florence (1989-1990); and two congregations in Columbia [Virginia Wingard Memorial (1990-1993) and Wesley United Methodist (1993-1996)]. In 1990, Jim was named senior pastor of Virginia Wingard Memorial - an 800 member, predominately white United Methodist congregation. He was one of a select group of five pastors across South Carolina who were asked to the cross the Sunday morning racial divide and lead a congregation of a different race or ethnicity, which he did for three years. Throughout his ministry, Jim experienced his share of being a trailblazer. In addition to his Virginia Wingard appointment, he served as the first black: editor of the Youth Publications; district superintendent of the Greenwood District; Associate Council Director; and Council Director of the SC Annual Conference. In addition to congregational ministry, Jim was an author and editor. He authored two books: Can Blacks Be Christian? and Black Pilgramage in America: The Christian Perspective and Experiences, as well as editing publications such as Struggles and Hopes of the Black Church; Explore; and Confirming My Faith (the official confirmation resources for the United Methodist Church). For 44 years, Jim's dedication to ministry and service were evident as a congregational pastor, supervisor and evaluator of pastors, and as a leader and member of numerous local and national organizations. He served on the board of directors of Hinton Rural Life; the SC Region Department of Mental Retardation; Claflin University Board of Visitors; the Conference Board of Ordained Ministry; and many others. He was a supporter of Oliver Gospel Mission, as well as a long-time member of Rotary International. Throughout his ministry, Jim received numerous awards and recognition for his work, including the honor of being selected as a delegate to the denomination's General Conference and Southeastern Jurisdiction in 1980, 1984, 1988, and 1992. Jim retired from the ministry in 1996, but continued to preach and teach occasionally, and lead by example daily. Throughout his ministry he was known for his caring and loving spirit, and astute council. Through school, the church, and the community, Jim made a lifetime of friends and acquaintances. He was a great storyteller and great listener; however, it is Jim's quiet demeanor, friendly smile, easy laugh, and unwavering faith that will live on in the memory of those he influences, as well as those that loved him. Jim was a devoted husband to the former Thelma Curtis as well as a devoted father to four children,a proud grandfather, and a devoted brother. In addition to his parents, Jim was preceded in death by his beloved wife Thelma and two sisters, Eloise Middleton and Alice Rosa Lee Perkins. Jim leaves to cherish precious memories his children: James Jr., Cynthia, Jessica, and Curtis; his granddaughter Andrea; his siblings: Evelyn Williams, Matilda Gadsden, Martha (Warren) Gant, Estelle Sellers, and William Gadsden; and a host of nieces, nephews, other relatives, and friends.

Rev. James Solomon Gadsden, Sr., affectionately known as Jim to many, was called home to his heavenly reward Monday, June 19, 2017, in Columbia. Jim, the ninth child born June 12, 1930, to the late William and Rosa Rollerson Gadsden, was a... View Obituary & Service Information

The family of Rev. James Solomon Gadsden Sr. created this Life Tributes page to make it easy to share your memories.

Send flowers to the Gadsden family.