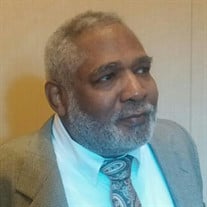 James Earl Gieger died peacefully at his home on Tuesday, November 14, 2017. Born on March 29, 1945, he was the third child of the late Odessa John Geiger and Sallie Ann Weeks Geiger Green. Known affectionately to his family as “Jimmy,” “Joe G,” and “Poozah,” he was beloved by many. Poozah was an outspoken and critical thinker who kept up with the current world events and was especially fond of African-American cultural happenings. His research on the heritage of the family name led him to change the spelling of his last name to “Gieger.” James was educated in the public schools of Richland County, SC, graduating from Booker T. Washington High School in the Class of 1964. He enlisted in the United States Air Force and served two tours in Vietnam, earning the rank of Staff Sergeant. After leaving the Air Force in 1969, James accepted a job at Allied Chemicals (later Shaw Industries), where he worked until his retirement in 1998. By all accounts, he was an outstanding employee with an amazing work ethic. While working, he earned an Associate’s Degree in Business Management from Columbia Commercial College and a Barbering Degree from Columbia’s Patterson School of Barbering. In his later years, Poozah triumphed over many health challenges with a quiet, unwavering faith in his Savior. As a teenager, he accepted Christ as his Savior and was baptized at Zion Chapel. He knew that it was God’s grace, love, faithfulness, and hope that gave him and his family and friends the strength to persevere. He was especially grateful for and proud of the care that his doctor/friend Green B. Neal provided and the loving support that his younger siblings gave him. No matter what he endured, James never complained. He simply enjoyed being with his family, watching his favorite TV shows, and eating barbecue and the delicious meals prepared by Sallie Mae Hills Counts, who along with her daughter Sabrina Counts Gaulman and her sister, the late Naomi Hills Geiger were also devoted to him. Poozah will always be remembered for his joyful approach to life and his generosity toward his loved ones, especially his nieces and nephews who knew that he did not mind spoiling them, no matter what their parents said. He especially delighted in being “Big Bro” to his youngest siblings, Bernard, Doris, and Annette. James found great pleasure in the simplest things: being chauffeured around familiar places in Columbia by his sister Donna; eating cookies and ice cream; and chewing his favorite gum, Juicy Fruit. He loved to dance, and accompanied by his brother Larry and his cousin/brother Vincent Weeks, took special pride in “Doing the James Brown!” Finally, he will be remembered fondly for his sense of fashion, style, and immaculate dress. Poozah was always “clean” and always, always “cool.” In addition to his parents, he was also preceded in death by his stepfather Daniel Green; his oldest brother and sister-in-law Sylvester and Naomi Hills Geiger; and his oldest sister Romell Young. James leaves to cherish precious memories two brothers: Larry (Shirley) Geiger and Daniel Bernard (Veronica) Green; three sisters: Donna (Milton, Sr.) Ashford, Doris (Daniel) Ramey, and Carolyn Annette (Alexander) Taylor; and a host of nieces, nephews, other relatives and friends. Rest well, dear brother, we will miss you, and we take comfort in knowing that, though you are absent from us, you are present with the Lord.

James Earl Gieger died peacefully at his home on Tuesday, November 14, 2017. Born on March 29, 1945, he was the third child of the late Odessa John Geiger and Sallie Ann Weeks Geiger Green. Known affectionately to his family as &#8220;Jimmy,&#8221;... View Obituary & Service Information

The family of James Earl Gieger created this Life Tributes page to make it easy to share your memories.

Send flowers to the Gieger family.