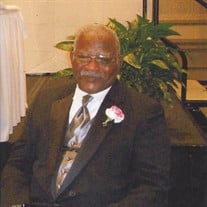 The Reverend Doctor James R. Glover, Jr., was called from earthly labor to heavenly reward on Monday, October 1, 2018, at Providence Hospital in Columbia, South Carolina. Born July 10, 1943, in Mount Pleasant, South Carolina, he was a son of the late Annabelle Simmons Dilligard and James Glover, Sr. Dr. Glover was a graduate of Laing High School , Mount Pleasant, Class of 1962. He continued his education at Furman University and Erskine College, and retired from the United States Army after twenty-two years of service. He was licensed and ordained in the Columbia Conference of the Seventh Episcopal District of the African Methodist Episcopal Church, beginning his ministry in the Lancaster District. His first pastoral charge was Rock Hill AME Church, where he served for a year before taking numerous charges throughout the episcopal district including: Shady Grove AME (Blythewood), Mt. Pisgah AME (Greenwood), Bethel AME (Laurens), and finally Reid Chapel AME (Columbia) where he served for over fifteen years. Under his leadership, Reid Chapel built the current sanctuary and the Ruth Simon Family Life Center. He served on a number of committees at the District, Conference, and Episcopal levels, as well as serving as a Delegate to a number of General Conferences. He was appointed the Presiding Elder of the Lancaster District in 2004, where he adopted the motto, “ The District where Everybody is Somebody, and God is in charge of us all.” During the 2014 Post–Planning Meeting, he was appointed Presiding Elder of the Orangeburg District where he served until his retirement. In addition to his parents, he was preceded in death by his sister, Eartha Lee Vanderhorst. He leaves to cherish precious memories his wife, Clemegine Glover; two children: Jeffrey R. (Karina) Glover of Peyton, Colorado, and Jametta Glover (Nathanial) Carter of North Charleston, South Carolina; six grandchildren: Sidney Glover, Gianna Batts, Jayda Glover, Isabella Glover, Dorian Glover Williams, and Jace Glover Williams; one great-grandchild, Nalaa Glover; eight siblings: Willa Mae Heyward, Virginia Ann Glover, Rev. Arthur B. (Brenda) Glover, James (Gladys) Glover, Mark Glover, Patricia Jones, John (Emily) Dilligard, Jr., and Brenda Dilligard; and a host of other relatives and friends.

The family of Rev. James R Glover, Jr. created this Life Tributes page to make it easy to share your memories.

Send flowers to the Glover, family.