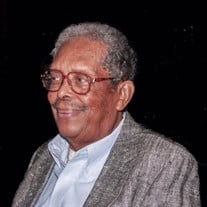 James Griffin, Sr. departed this earthly life for his heavenly home Friday, November 25, 2016, at Providence Hospital. James Griffin was born August 4, 1925 in Newark, New Jersey, and attended Newark Public Schools. After completing secondary school, he gained employment with Swift and Company in Newark. While riding the bus in 1943, he was awestruck by a young passenger who boarded the bus on which he was riding; he inquired of his friend the name of the young lady with whom he was smitten and was told her name was Bertha Cunningham. James told his friend that the soon-to-be 13-year-old Bertha was going to be his wife; James himself was just shy of 18. Upon turning 18, James was drafted into the US Army; while still in the US, he and Bertha corresponded on a regular basis. He came home on furlough before departing overseas, at which time he requested that she wait for his return. James served in the Quartermaster Service Company in the European Theater Operation of WWII in France, England, Belgium, and Germany. While on active duty, James received The American Theater Company Ribbon, the Good Conduct Medal, The Victory Medal, and the European African Middle Eastern Theater Company Ribbon. James received an Honorable Discharge in 1946 and resumed his employment with Swift and Company, retiring after 35 years of service. He also returned to the love of his life, marrying Bertha on February 1, 1947. They shared a long life and marriage together, anticipating their upcoming 70th anniversary in February. In addition to his loving and devoted wife Bertha, he leaves to mourn his passing 3 children: Wayne Griffin, Denise Bryant, and Geoffrey Griffin; 5 grandchildren: Dwayne Griffin, Jamal Bryant, Shakeer Bryant, Dawn Bryant, and Lindsey Griffin; 11 great-grandchildren; 5 sisters; and a host of nieces, nephews, and cousins. He had a very special place in his heart for his devoted and loving daughter-in-law Phyllis, whom he loved dearly and who was with him during the last days of his life. She was "his" Phyllis, and he was "her" Pop. James touched the lives of many people who came to love him dearly. May we all find solace in reflecting on the many wonderful and precious years we shared with him. In lieu of flowers, the family requests that memorial gifts be made the the American Heart Association.

The family of James Griffin Sr. created this Life Tributes page to make it easy to share your memories.

James Griffin, Sr. departed this earthly life for his heavenly...

Send flowers to the Griffin family.