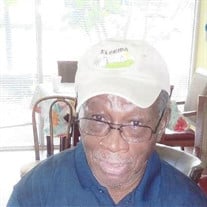 James Howell departed this earthly life on Tuesday, March 15, 2016 at Providence Hospital in Columbia S.C. Born in Saint Mathews, S.C. on July 15, 1931, he was the youngest of eleven children born to the late John and Anna Haygood Howell. Mr. Howell was a life-long member of Calvary Holiness Church where he served in many capacities throughout his lifetime including: Deacon for over forty years and a trustee for the Finance Department. He was first employed as a millworker and later by Owens Steel Company where he worked for over 15 years until his retirement. In his spare time, he enjoyed studying the Bible, working on cars, and making leather handbags, belts and wallets. He most enjoyed driving his beloved wife to the country and spending time together. Mr. Howell met the love of his life, Geraline Dukes, when she was thirteen but was not allowed to begin courting her until she was fifteen. They were united in holy matrimony on October 21, 1951. They were blessed with thirteen children. In addition to his parents, he was preceded in death by four children: Lois, Lottie, a special baby girl and Willie James Howell; his brothers Micheal, Perry, Charlie, Jonathan and Lowman; his sisters Annie, Arie, Johnnie Mae, Pansy and Sarah. He leaves to cherish precious memories his children: Betty, Mary and her husband Archie, Patricia, Christina, Linda and her husband Andy, Johnny and his wife Alma, Lee Rogers, Sherman and his wife Karen, Vicki and her husband James; over seventy-five grandchildren; over eighty great-grand-children; over forty great-great-grandchildren; his sister Laura Davis; The “Dukes brothers and sisters” who were more like siblings than in-laws; and other relatives and friends.

James Howell departed this earthly life on Tuesday, March 15, 2016 at Providence Hospital in Columbia S.C. Born in Saint Mathews, S.C. on July 15, 1931, he was the youngest of eleven children born to the late John and Anna Haygood Howell.... View Obituary & Service Information

The family of James Howell created this Life Tributes page to make it easy to share your memories.

Send flowers to the Howell family.