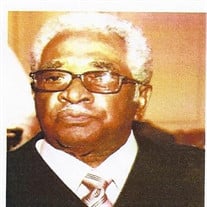 Life Reflections James Kendrick, husband of Darnella McKnight Kendrick, son of the late Henry and Janie Osborne Kendrick was born on July 18, 1933 in Sumter County. He departed this life on Sunday, December 11, 2016 at Cottonwood Villa of Bishopville, SC. He was educated in the public schools of Sumter County and graduated from Lincoln High School. He served in the U.S. Army. After being honorably discharged from the Army he moved to Harrisburg, PA. While he was in Harrisburg, he joined and served faithfully at Goodwin Baptist Church. Upon his return home to care for his mother, he joined High Hills Missionary Baptist Church. In addition to his parents, he was preceded in death by a son, James Kendrick Jr. and a brother John Evely. He leaves to cherish his memories his wife, Darnella M. Kendrick, two daughters, Stephanie Kendrick of Florida, and Vivi Ann Kendrick of Harrisburg, PA; one grandson Kendall Kendrick of Florida; one brother Thomas Kendrick of Temple Hill, Maryland; a sister Bernice Rivers of Sumter, SC; an aunt Lottie Belle Smith of Washington, D.C.; an uncle Herman (Ethel) Kendrick of Silver Springs, Maryland; and a host of nieces, nephews, cousins, and other relatives and friends. Special Acknowledgement The family of Mr. James Kendrick is deeply appreciative of all acts of kindess expressed, implied, or demonstrated during our time of bereavement. May God richly bless you for the love and support you have given us.

The family of Mr. James Kendrick created this Life Tributes page to make it easy to share your memories.

Send flowers to the Kendrick family.