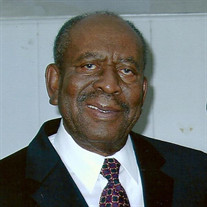 Celebrating the Life of Mr. James Abron King James Abron King was born September 16, 1925 in Clarendon County. He was one of nine children of the late Willie King and Frances McCray King. He attended the public schools of Sumter County and continued his education at Sumter Area Technical College. He was a man that believed in serving the Lord and was a lifelong member of Rock Hill Missionary Baptist Church where he served as a Trustee and a member of the Senior Choir. James served his country faithfully in World War II as a solider of the United States Army and was honorably discharged after his tour of duty. Prior to his tour of duty, he met the love of his life, Bessie M. Scott. The two were married in New York City, on May 11, 1952. To this union one child was born, Audrey Jean King-Grant. James and Bessie enjoyed 63 years of marital bliss until the Lord called him home early Saturday morning, April 23, 2016. Our hearts are flooded with joy as we reminisce and reflect on the achievements of his life. Affectionately known as “Little James,” he was a family man, who loved God and his family. He always wanted his family to have the very best. He was employed as a supervisor at Williams Furniture Company for 39 years and Tuomey Hospital for 29 years before retiring. He served as a leader for Martin, Byrd, and Hunter streets, the community which he lived by collecting donations for bereaved families and rallying the surrounding communities together to help those that were in need. As a member of the former Block Community Club, he also helped sponsor various events to help families in the surrounding area. James was also a member of the Brotherly Love Lodge-99, as well as a member of the local chapter of the Veterans of Foreign Wars in Sumter, SC. During his life, he received numerous recognitions for various achievements. He has books filled with pages of awards received from Tuomey Regional Medical Center, Sumter Area Technical, and Rockhill Missionary Baptist Church. In his pastime, he enjoyed fishing with his brothers, baseball, visiting his family up north and socializing with his Block Club members. When you couldn’t find him on the streets of his community, you could find him in front of the T.V. watching his favorite ministry leader Pastor Joel Osteen and The Jimmy Swaggart singers. He was a die -hard fan of The Price Is Right, The Young and the Restless, Wheel of Fortune, Jeopardy, and CNN. “Lord that man loved his CNN and the Atlanta Braves.” We, the family rejoice in the life we were privileged to share with our beloved husband, father, uncle, cousin, and friend. We thank God for every day that we were blessed with the light of his life. Although he is gone, he will never be forgotten. He leaves to cherish his memories a devoted and loving wife, Bessie Scott-King, his faithful daughter, who will always be “Daddy’s Girl,” Audrey King (Jerome) Grant; four sisters-in-law, Creola Scott-Bowens, Virginia King and Shirley Scott, Sumter and Oletha King, Manning, SC; one brother-in-law, Edward (Minnie) Scott, Bishopville; special cousins, Esaw Walters, Sumter; Fannie Wiggins and Lorena Snow, Baltimore, MD and Rebecca Ham Taylor, Richmond, VA. James has a host of nieces, nephews, other relatives and dear friends who will never forget all of the seeds of love and kindness that were sown because to his unselfish acts. He stood in the gap as a father figure for Cheryl King-Frazier, Kimberly Wilson, Reggie Wilson, and Oliver Sims. In addition to his parents, he was preceded in death by his brothers, John W., William, Irvin, Wilbert, Abraham, and Willie Asbury; his sisters, Leola Young, Gussie McFadden, Rosa Lee Hughes and Annie Mae King Randolph; special cousins, Albertus Vaughn, Berline Vaughn Bartholomew, Lee McCray and Johnny McCray.

Celebrating the Life of Mr. James Abron King James Abron King was born September 16, 1925 in Clarendon County. He was one of nine children of the late Willie King and Frances McCray King. He... View Obituary & Service Information

The family of Mr. James Abron King created this Life Tributes page to make it easy to share your memories.

Send flowers to the King family.