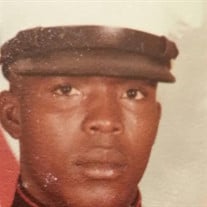 Lance Corporal James Lee “Pee Wee” Richardson was born on November 1, 1958. He was the son of the late Ned Woods, Sr. and Martha Richardson-Peterson. James was raised by his mother and his adopted father, the late James “Buster” Peterson. He departed this earthly life on Wednesday, January 6, 2016 at Palmetto Health Tuomey in Sumter, South Carolina. James was educated in the public schools of Sumter County and graduated from Mayewood High School in 1978. After graduating from high school, he enlisted in the United States Marine Corps. He graduated base combat training from Marine Corps Recruit Depot in Parris Island, South Carolina. During his six years of service, he was stationed at various Marine bases throughout the world. He was later employed by Whittaker Incorporation in Mayesville, South Carolina for nearly twenty years. James was married to Carolyn J. Fullwood. To this union they were blessed with two daughters, LaToshia L. Richardson and Tymeka S. Richardson. “Pee Wee” as he was affectionately called, was greatly known by many. He played a loving role in all of our lives. His warm smile and good nature brought smiles to the hearts of those who knew him. He shall be held in sacred memory in our lives. In addition to his parents James was preceded in death by a sister, Joann Richardson. He leaves to cherish his precious memories; two daughters, LaToshia L. Richardson and Tymeka S. Richardson and their mother, Carolyn J. Fullwood, all of Myrtle Beach, SC.; two brothers, Floyd Peterson and Bernie Fortune, both of Sumter, SC; five sisters, Mattie R. Carter, and Martha P. Harrison, both of Sumter, SC, Deborah Wheeler and Virginia Logan, both of Mayesville, SC and Deloris (Luther) Thomas of Fort Myers, Va.; five grandchildren, Jammie Chestnut Jr., JaReah Gore, Jamerius Richardson, Khalil (KJ) Bellamy and Khaliq Bellamy all of Myr- tle Beach, SC; a very special best friend for nearly fifty years, Mr. Earl Jefferson and a host of nieces, nephews, and other relatives and friends.

The family of LCpl. James Lee Richardson created this Life Tributes page to make it easy to share your memories.

Send flowers to the Richardson family.